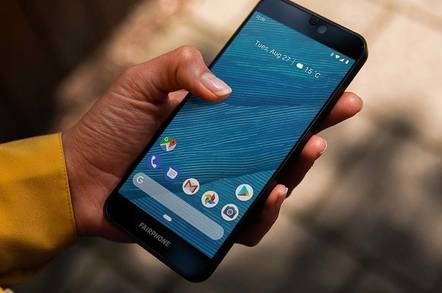 Fairphone 3, designed to be repairable and supplied with a screwdriver in the box

Fairphone, whose devices are designed to be sustainable and made in exploitation-free factories, will kick out its third unit in mid-September, priced at €450.00 including VAT.

The business, which describes itself as a social enterprise, is based in Amsterdam in the Netherlands and has 70+ employees around the world. Its approach is based on fairness in the supply chain – avoiding conflict minerals (minerals mined in the context of armed conflict or human rights abuse), using suppliers where workers are treated fairly, and sourcing from Fairtrade certified companies, designing for repairability and long life, and using recycled materials where possible.

The first Fairphone was released in 2013 and sold around 60,000 units. FairPhone 2 followed in 2015 and featured a modular design, to improve repairability and enable upgrades, though in practice the only upgraded module to be released was for the camera. The repairability benefit was real though, and teardown site iFixit awarded the device a repairability score of 10 out of 10 – in contrast to, say, the Samsung Galaxy S10, which scores 3, or a score of 6 for an Apple iPhone XR. Fairphone 2 sold over 40,000 units, and the business reported selling the last of its stock in April 2019.

That was more than Google achieved for its own modular phone, Project Ara, which was cancelled before anything was launched.

In the case of the Fairphone 2, the company published a list of all its 103 suppliers, including information where possible on smelters and refiners involved in the supply chain. The latter were audited for conformance with RMAP (Responsible Minerals Assurance Process).

Fairphone 3 runs Android 9 Pie and has a decent specification:

What you are really paying for, though, is the ethical approach. There is up to €40 cashback for grabs for recycling your old phone. No charger, earphones or USB C cable is included, on the basis that you can likely reuse what you already have; if not, you can purchase these separately.

Despite these worthy objectives, Fairphone's success to date is modest. The company has sold over 100,000 devices, but Samsung ships around 75 million smartphones every quarter and the total mobile phone market is over 1.5 billion annually.

This does not mean that Fairphone is not making any impact; but does suggest that its work is more about demonstrating an alternative approach and putting pressure on industry leaders than about the difference made by the mobile devices themselves.

It appears that for the majority of people and businesses, concerns about sustainable design are some way down the list of priorities when sourcing new devices. Another way to put this is that it is regulation rather than consumer choice that has the most impact on sustainability.

That said, the fact that Fairphone has survived six years and gets to launch a new phone is at least a crumb of comfort. ®

Fifty bucks a year buys you management tools and support