Imagine Siri as your IT help desk. Too scary? OK, imagine PAYG on-prem IT. Oh, too much? How about everything on Kubernetes? 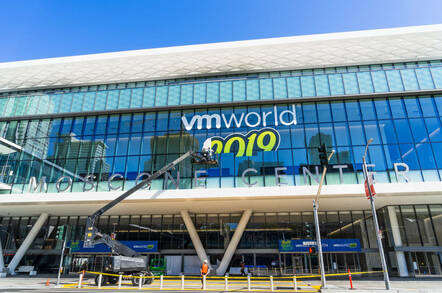 VMworld It's that time of the year when VMware gets customers, analysts, and tech press under one roof to do a victory lap and brag about all the stuff it's been up to.

Yes, it's VMworld 2019, this year in San Francisco, USA. The virtualization giant – which just gobbled up infosec outfit Carbon Black, and Dell-owned sibling Pivotal for $5bn – absolutely loves jamming a ton of announcements into our brains over the course of the conference. To spare you the overload, here's a quick no-hype summary of what we're told Vmware is going to be most proud of this week...

VMware Cloud on Dell EMC, the pay-as-you-go on-prem IT product touted earlier this year, is now available in the US. This glues together vSphere, vSAN, NSX, and Dell EMC VxRail into a VMware-managed hyperconverged system you basically rent despite it being on-premises. Meanwhile, VMware Cloud on AWS has smoother migration of workloads between AWS regions, better inter-connectivity between regions, and improved storage scaling using Elastic vSAN, it is claimed.

New product portfolio VMware Tanzu, available albeit as a tech preview, is designed to help enterprises build and run software on Kubernetes. It will link up technology from Pivotal, Bitnami, the vSphere family, the open-source K8s, of course, and other sources, to form, for now, something called Mission Control: a panel to manage Kubernetes clusters wherever they may be. Also in preview form is Project Pacific which hopes to knock vSphere into shape as a platform for running and managing K8s natively at some point in the future.

Speaking of Nvidia, the GPU slinger and VMware will this week declare they intend at some point to allow workloads running on VMware Cloud on AWS to tap into Nv's silicon to speed up stuff like AI applications. In practice, this means customers can rent EC2 bare-metal instances from AWS with Nvidia T4 GPUs, and use Nvidia's vComputeServer software to enhance their cloud-hosted apps.

Head in the clouds

The version 8 release of vRealize Operations will, in the software giant's words, let IT folks "manage multiple cloud resources and applications with the same software that they use to manage their datacenter." A SaaS version, dubbed vRealize Operations Cloud, will be available as a tech preview, too.

Meanwhile, deployment toolkit vRealize Automation 8.0 has various performance improvements, we're told, and is now built out of containers that make the code easier to install than previous iterations. It will also be available from the VMware vRealize Automation Cloud, a rebranded Cloud Automation Services.

If you wanted a version of VMware's costs'n'policy manager CloudHealth that supports on- and off-prem hybrid clouds, look no further than the aptly named CloudHealth Hybrid. System visibility tool Wavefront sports a new enterprise-wide dashboard, can automatically discover Kubernetes environments, applications, and infrastructure as part of its K8s monitoring feature, and gains distributed trace log support.

VMware and its parent Dell EMC are working together to provide disaster-recovery-as-a-service using AWS S3 storage and VMware Cloud on AWS, and to improve data protection for VMworld virtual machines running on Dell data center gear.

Support-desk offering VMware Skyline has been spruced up with, among other things, "automated software compatibility checks, automated log bundle upload for Horizon 7.10 and above via Log Assist, and integration with Dell EMC Support Assist," according to the IT giant.

Siri if she worked on a help desk

Next, VMware Workspace ONE, which is the big V's office IT wrangling toolkit, has been updated to include, as is the fashion these days, an AI-powered virtual assistant that hopes to help staff obtain and set up new devices, fix their Wi-Fi, open service tickets, sign up for company benefits, and so on. This tech is powered by IBM Watson Assistant, we're told, and is essentially a text-based chat bot.

There are other enhancements for Workspace ONE, from better mobile support for HR, line-of-business, and IT service management applications, to a feature that scores users and devices on how much of a security risk they are, which can trigger access policy changes and alerts to prevent any potential damage or data theft.

Phew, well done. You made this far. Thank you. No doubt the full announcements will land somewhere here by the time you read this, if you want the pure and unadulterated VMware-speak. ®