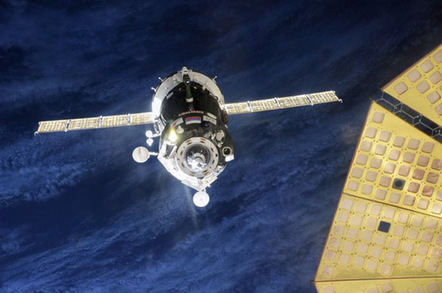 A Soyuz approaching the ISS

Russia's robotic Soyuz MS-14 test mission hit a glitch over the weekend after a botched attempt to dock with the ISS.

The uncrewed spacecraft (save for a vaguely terrifying robot) appeared unable to lock onto the orbiting outpost as it approached.

The cause of the failure, the Kurs docking system, will have left some with a distressingly sphincter-loosening sense of deja vu. An attempt to reduce the reliance on Kurs by the manual docking of a Progress freighter to Russia's previous space station, Mir, left that outpost crippled and losing pressure following a collision.

This time, however, there was no such drama and those aboard the ISS were not put in peril by the failure. The docking attempt was instead aborted as the Soyuz appeared to slew in an alarming fashion on its approach. The spacecraft then retreated to a position safely distant from the ISS as controllers pondered what to do next.

The current plan calls for the crew to shift one of the Soyuz lifeboats currently docked to the station to another port in order to allow MS-14 to have another crack at it, this time at a different location on the ISS.

The issue, according to Russian space agency Roscosmos, was a "malfunction of the equipment" onboard the ISS rather than the Soyuz.

The relocation element happened early 26 August, with Alexander Skvortsov manually flying the Soyuz MS-13 from Zvezda to the MIM2 module. MS-14 will try another automated docking at the freshly vacated Zvezda port on 27 August.

The #SoyuzMS13 spacecraft was successfully redocked from the Zvezda module to the Poisk module of the Russian segment of the ISS.

The freed up Zvezda module berth will be used to dock the Soyuz MS-14 spacecraft, which is scheduled for August, 27 at 03:12 UTC pic.twitter.com/8iGFmgCwBz

It's all a bit embarrassing. MS-14 is a demonstration of an updated Soyuz spacecraft ahead of a change of launcher to the Soyuz 2.1a in 2020.

The changes are needed since the Soyuz 2.1a rolls to the correct heading following lift-off, while the existing Soyuz-FG has to effectively be manually pointed the right way on the launch pad. Since a rolling rocket could trigger the trusty Soyuz launch abort system, which saved the lives of two ISS crew members last year, Russian engineers have tweaked the system a bit.

The uncrewed Soyuz MS-14 also includes updates to the descent control system and navigation modifications. Hence the test with just a robot strapped into the Soyuz along with some handy cargo.

The current situation, according to Roscosmos, is "difficult, but under control." ®