Fraught 'naut who sought consort's report says: I was up to naught, I will thwart fault tort 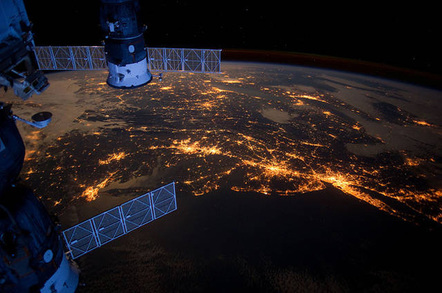 A NASA astronaut has been accused of breaking into her wife's bank account while working aboard the International Space Station.

Anne McClain, a veteran NASA flyer and one of the presumed frontrunners for the next manned lunar missions, is the subject of a complaint by her former spouse who claims that, while in orbit on the ISS earlier this year, McClain accessed her bank account without permission from a NASA computer.

According to multiple reports, the alleged unlawful access took place while McClain and ex-wife Summer Worden were in the midst of a divorce and custody battle. It is claimed that, while in low-earth orbit, McClain used Worden's credentials to log into the account and snoop on her finances.

Worden, who has complained to NASA, as well as the FTC, says McClain had been told Worden's account was off-limits, and that she did not have permission to use the password to check on activity. The American space agency's inspector general will probe the claims.

McClain acknowledged looking up the account information from the internet connection NASA maintains aboard the ISS, though the astronaut is said to be contending that she did not know she was not supposed to look at the account and was merely checking on the balance to make sure the family had enough money for day-to-day expenses.

The astronaut has also posted a tweet to address the reports...

There’s unequivocally no truth to these claims. We’ve been going through a painful, personal separation that’s now unfortunately in the media. I appreciate the outpouring of support and will reserve comment until after the investigation. I have total confidence in the IG process.

"Lt Col. Anne McClain has an accomplished military career, flew combat missions in Iraq and is one of NASA’s top astronauts. She did a great job on her most recent NASA mission aboard the International Space Station," NASA said in a statement to The Register.

The activity in question occurred during the six months McClain spent aboard the space station earlier this year. The mission drew worldwide attention earlier this year when its planned highlight, the first ever all-female spacewalk, had to be cancelled because the space agency didn't think to pack enough gear to kit two women at the same time.

According to the New York Times, Worden and McClain are in the middle of a contentious legal battle over the custody of the son she and Wordon have been raising together for the past five years.

The case, it is said, has been complicated by questions over whether McClain has any parental rights over Worden's child (who was one year old when the pair were married) and allegations by McClain that Worden has a history of making poor financial decisions and having a bad temper.

The allegations come amid speculation that McClain, a six-year NASA vet and senior US Army pilot with more than 800 hours of combat flight over Iraq, is being considered among the favorites to lead NASA's new lunar missions. ®