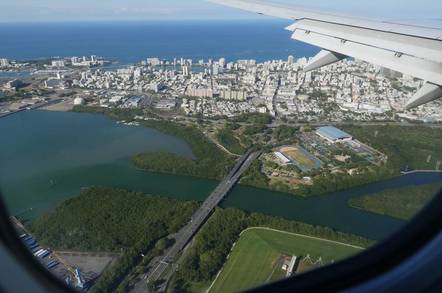 Three ISPs will be fined $25,000 apiece by America's broadband watchdog, the FCC, for interfering with weather signals in Puerto Rico.

Boom Solutions, Integra Wireless, and WinPR were all found to be using devices for their point-to-point broadband that were “misconfigured,” according to the regulator this week. This caused interference with a doppler weather radar station at San Juan international airport.

The weather station is used to detect potentially dangerous weather patterns, such as wind shear, and so any interference is “potentially life threatening,” the FCC noted.

It’s good to see the FCC finally come to Puerto Rico’s defense after its extraordinary failure to help the island after it was devastated by Hurricane Maria in 2017. That failure saw the agency heavily criticized by the General Accountability Office (GAO) and its own commissioner, Jessica Rosenworcel.

The FCC also kept loosening reporting requirements on the recovery of the island’s cell phone network - seemingly in response to articles The Register published highlighting its lackluster effort - which only served to slow the recovery.

But sadly the FCC under chair Ajit Pai has not had a change of heart: this week’s fines represent just the latest spat in an inter-agency battle over 5G technology.

The question over whether weather equipment can be adversely impacted by ISPs and mobile operators has been central to an effort to limit the use of spectrum for new 5G networks. As we reported in June, that effort is being driven by the deputy chief of staff and director of policy at the Commerce Department, Earl Comstock.

Comstock is intentionally delaying the use of 24GHz spectrum for 5G signals out of "personal animosity," according to an extraordinary letter by Senator Ron Johnson (R-WI). Comstock is said to be behind a determined campaign against the relevant spectrum - which the FCC has already auctioned off - by encouraging other government agencies including the NTIA and the National Oceanic and Atmospheric Administration (NOAA) to oppose its use.

That campaign contributed to the shock resignations of NTIA assistant secretary David Redl and its legislative lead Mike Platt earlier this year.

Even though the interference in this Puerto Rico case uses a different spectrum band – 5.6 GHz, as opposed to the 24GHz spectrum at the heart of the 5G battle – the core argument is the same: that allowing commercial entities to use frequencies set aside for other uses, particularly weather measurements, is potentially dangerous.

Also on Friday, the FCC was effusive about a new agreement announced by the main mobile operators to block robocalls before they reached consumers, as opposed to letting them connect with a warning that they were probably a robocall. One nets the mobile companies money, the other doesn’t - guess which?

“I salute today’s bipartisan, nationwide effort to encourage best practices for combating robocalls and spoofing and am pleased that several voice service providers have agreed to abide by them,” said FCC chair Pai.

Again the truth behind the news is somewhat less positive: the mobile phone operators have acted only after significant political pressure from both parties in Congress (a Stop Robocalls Act was getting widespread support) and after a large number of state attorneys general made it clear they were going to take legal action against the mobile companies.

The FCC has slow-walked the issue of robocalls - which it admits is the number one complaint it receives from American consumers. The regulator even pretended in June that it had just discovered that its own rules may have been hampering the wider use of robocall blocking technology.

This latest action again fails to give a deadline for action, meaning that mobile companies may choose to spend years implementing it, or only implement part of it and wait to be pressured to do the rest.

But something is better than nothing and the industry will take what it can get. One such executive, CTO of call tracking and analytics firm CallRail, Elliott Wood, welcomed the news.

"The FCC’s decision to officially empower carriers to block robocalls finally aligns with public sentiment to escape the nuisance of these calls once and for all,” he told The Register.

“Robocalls threaten the integrity of that open public telephone network. It’s imperative that the quality and security of calls is preserved for the sake of both businesses and consumers: robocalls must be stopped, and the FCC’s action marks an important step in the right direction to mitigate the issue." ®