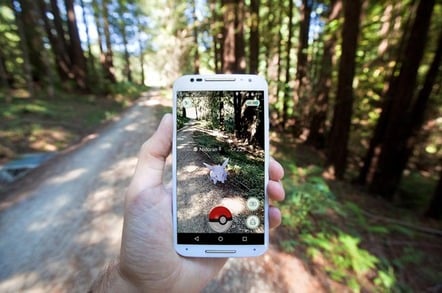 The programmers behind augmented-reality pest-chasing Pokemon Go have settled a class-action lawsuit in the US brought by angry homeowners who claimed the video game encouraged people to trespass on their land.

One owner of an oceanfront condo in Florida was confused, and then infuriated, when hundreds of players "acting like zombies, walking around, bumping into things" appeared on his property at all hours of the day and night. Another complained he had had five different people ring his doorbell and asked to be allowed into his backyard to catch Pokemon.

Pokemon pusher Niantic has not accepted any blame or liability, and will pay just over $4m to settle the case - virtually all of which will go to the lawyers. The 12 people who actually brought the case and have pushed it through the Northern California Federal Court for three years will get a measly $1,000 apiece, after the judge decided that the requested $2,500 was “way too high.” Everyone else affected will get zilch. Welcome to the world of class action lawsuits.

Notably the settlement [PDF] means that there won’t be a decision on how virtual objects in the real world interact with property laws: something the judge noted does not have any clear precedent. His actions in the case have left the legal situation wide open: he did not accept Niantic’s argument that it was not responsible for what its players did, while at the same time he dismissed the complaints of the property owners.

It is those stops - some of which were placed on private property - that drove the lawsuit, with homeowners saying that complete strangers were wandering onto their property in order to visit the virtual stops.

Complaints at the ready

As part of the settlement, Niantic has agreed to set up a website and online reporting system for people annoyed by blundering gamers on their land and has said it will resolve 95 per cent of complaints within 15 days.

It has removed “Pokestops” close to single-family houses, and has said it will not place new ones close to such houses. It will also add warnings to the game telling players to be aware of their surroundings, and will follow the hours of public parks.

The Pokemon Go became wildly popular when it was launched three years ago and led to a series of bizarre incidents including thugs hanging around popular spots to rob geeks and a spike in car accidents as people either drove around while playing or crashed into zombie-like players in the road. It even received an Islamic fatwa.

Although its popularity has shrunk since there, there are still huge numbers of dedicated followers who can initially be difficult to identify, thanks to pretty much everyone staring at their phones these days while walking around. But if someone is standing stockstill and repeatedly swiping up or tapping madly on their screen chances are they are lost in the world of Pokemon Go. ®

If you lose, get your cheque book out, High Court judge rules amid two-year legal battle