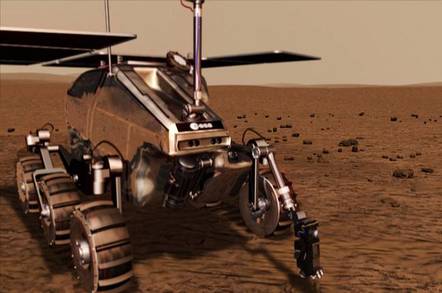 While ESA continues to grapple with balky parachutes ahead of the ExoMars 2020 mission, the cameras for the Rosalind Franklin rover have been fitted to the British-built trundlebot.

The "PanCam", which sits on top of a mast that rises two metres above the ground, is designed to provide Earthbound boffins with 3D stereo imagery of the terrain around the rover. As well as identifying where the machine actually is and picking interesting sites on which to wield the rest of the trundlebot's suite of instruments, the camera will also be used to study the atmosphere.

Comprising two Wide Angle Cameras (WAC), each of which is fitted with a 12-position filter wheel in order to study different wavelengths, the PanCam will also monitor the samples taken by the rover's drill before they are ingested and crushed within the machine's internals.

As well as the WACs, with their 37°, fixed-focus field of view, the PanCam is also fitted with a single High Resolution Camera (HRC). The HRC will be used for capturing high-resolution colour images and has an autofocus mechanism, although only a 5-degree field of view.

The optics sit on a unit capable of panning and tilting on top of the mast assembly.

Professor Andrew Coates, PanCam principal investigator from the UCL Mullard Space Science Laboratory, was understandably chuffed to see the fruits of 15 years of labour bolted to the Rosalind Franklin rover at Airbus Defence and Space in Stevenage, Hertfordshire. He said: "Now we are ready to go. Next stop Mars!"

Hopefully that landing on Mars will not be at a velocity that leaves those painstakingly assembled instruments scattered over the surface of the red planet. We checked in with ESA to see how things were going with the parachutes following the test failures earlier this month and were told by a spokesperson: "We are fast, but not that fast."

Which is fair enough.

The PanCam – which also includes work from the University of Aberystwyth as well as dozens of other experts across the UK, Switzerland, Germany and Austria – is due for launch in July 2020, assuming ESA is able to solve the current parachute problem.

Otherwise the only thing those optics will encounter is the ground. Terribly, terribly fast. ®