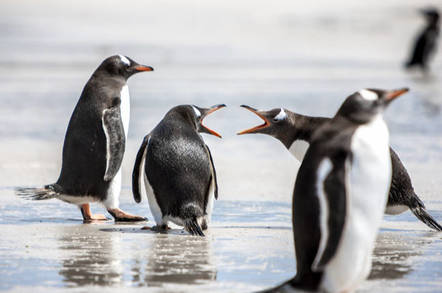 Round Up While India arrived in lunar orbit this morning, bickering over who would lead NASA's next lander flared up, Rocket Lab notched another success and a Chinese satellite appeared to falter.

Rocket Lab continued its run of successful launches yesterday as it sent another four satellites into orbit aboard its Electron launcher.

The eighth launch, named "Look Ma, No Hands", also included the Blackbox Recorder and Useful Telemetry Upload System (BRUTUS) to measure loads on the first stage as it plummeted back to the ocean ahead of tweaks to the booster aimed at reusing the thing.

The first visible changes to the Electron vehicle are expected to be seen on the launch after next with recovery efforts starting in earnest next year.

The launch went ahead at 12:12 UTC yesterday from the company's complex in New Zealand's Māhia Peninsula after being delayed by high winds at the site over the weekend.

Two experimental spacecraft for the US Air Force, a maritime surveillance platform for UNSEENLABS and another Earth-imaging satellite for BlackSky were deployed by Electron's Kick Stage into a 540 x 540km orbit at approximately 54 minutes after liftoff.

The BlackSky Global-4 satellite joins the Global-3 spacecraft launched by an Electron in June.

As ever, Rocket Lab remains tight-lipped about the next launch, saying only that it is scheduled for liftoff "in the coming weeks".

Another launcher aimed at the growing market for lightweight satellites took its first flight to orbit last week as a new rocket developed by the China Academy of Launch Vehicle Technology (CALT) sent three satellites into orbit.

The rocket, Smart Dragon-1 (SD-1), took less than 18 months to develop, according to Chinese media, and is capable of sending 200kg to solar synchronous orbit. The rocket, which uses solid propellant, is notable since it can be produced within six months and fired off less than 24 hours after arriving at the launch site.

The operators, China Rocket Co Ltd, expect to complete to five launches of the vehicle by the end of 2020.

The news was, however, not so good for ChinaSat 18, a communications satellite launched into space by a Long March-3B rocket from the Xichang Satellite Launch Center at 12:03 UTC on 19 August. After an even longer silence than usual over the state of the mission, it appears that while the launch itself was a success, and separation of the satellite was "normal", the spacecraft itself "is now working abnormally".

Handbags at dawn over Lunar Lander

NASA Administrator Jim Bridenstine took a trip to the agency's Michoud Assembly Facility last week to check out progress on the monstrously delayed Space Launch System (SLS), which is due to take astronauts to the Moon in 2024.

The core stage of the rocket, once complete and outfitted with four RS-25 engines scavenged from the Space Shuttle programme, will measure 212 feet high with a diameter of more than 27 feet. It will then be fired as part of the Green Run test before being shipped to Florida ahead of launch.

The launch date itself "remains under review" because, well, NASA is still looking for someone to actually head up the human spaceflight programme, according to Bridenstine.

However, to actually land humans on the Moon needs a lander. The inevitable NASA Center rivalry popped up once again as Bridenstine took the opportunity to announce that the Marshall Space Flight Center in Huntsville, Alabama (along with "experts from other centers"), would be leading the development of the all-important lander.

Stung that NASA's Johnson Space Center (JSC) would merely be working "with a commercial partner to design and develop" the habitation and logistics outpost for the lunar gateway, Congressman Brian Babin of Texas snorted that he was "disappointed by the decision", pointing out that JSC was "where the Apollo lunar lander program was successfully managed".

Of course, the actual brains behind that lander have long since retired or passed away and any records that survive reside in NASA's archives. And to take Babin's frothing to its logical conclusion, the Apollo lander itself was built at Grumman's Bethpage plant in New York, so presumably the congressman would also like to see the workshops, the last of which closed 25 years ago, reopened to churn out 2024's effort.

Although a visit to the Cradle of Aviation Museum in New York might help with understanding how things were done back in the day, since the 13th and last Apollo Lunar Lander (built for Apollo 18) remains on display.

ULA to send a Peregrine to the Moon

It isn't only SNC's Dream Chaser betting on ULA's next rocket, Astrobotic is going to use United Launch Alliance's Vulcan Centaur to deliver its Peregrine lander to the Moon in 2021.

Astrobotic was awarded $79.5m as part of NASA's Commercial Lunar Payload Services (CLPS) programme, which will see up to 14 payloads for the agency transported to the lunar surface. The company has managed to sign up 16 customers for its first mission to Moon.

And a risky mission it will be. The launch, from Launch Complex-41 at Cape Canaveral Air Force Station in Florida, is to be the first of two certification flights for the new booster. While the first Atlas V launch was a success, sticking hardware on one of the earliest flights is always a brave move.

It's not entirely clear why Astrobotic chose the Vulcan Centaur in what CEO John Thornton described as "a highly competitive commercial process". Presumably some hefty discounts were in order to dissuade the outfit away from something like a Falcon 9.

After all, we understand that SpaceX might have some space following the termination of competing Lunar-wannabe OrbitBeyond's CLPS contract.

Finally, India's Chandrayaan-2 completed its Lunar Orbit Insertion (LOI) manoeuvre this morning with a 1,738-second burn of the engine to drop the probe into a 114 x 18,072km orbit.

A few more burns will be needed to get the probe into a final orbit, around 100km from the Moon's surface. The lander will then separate and head to a 100 x 30km orbit ahead of a soft landing in the South polar region on 7 September. ®