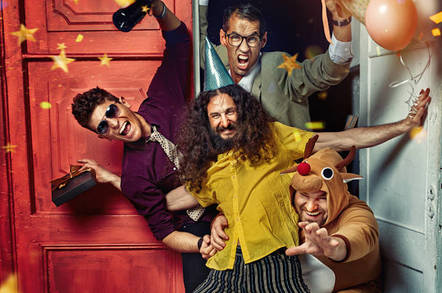 IBM is planning to allow chip designers around the world to freely create OpenPower-compatible processors.

The aim is obvious: to encourage the implementation of OpenPower CPUs, and get more Power-based systems out into data centers and the wider world. It also means engineers can customize their own OpenPower chips to run particular AI or analytical workloads, for example.

Specifically, IBM says it will "open" the instruction set architecture (ISA) of its OpenPower family of CPUs. Given that the ISA is, and for years has been, available online to read, by "opening" the architecture, Big Blue means it is licensing its technology to everyone to use, royalty free. This will allow people to implement and manufacture their own processors capable of running software built for OpenPower.

In other words, IBM isn't going to reveal the internals of its OpenPower CPUs. Rather, it's allowing anyone to create, without paying a penny in fees or royalties to Big Blue, processors that understand the OpenPower instruction set – the low-level language, if you will, that applications and operating systems should speak to command the hardware on behalf of the user.

It means, say, El Reg would be free to design and sell an OpenPower processor, and it would run the same software built for other OpenPower chips, such as IBM's commercially available Power9 series. The goal is to increase the diversity of OpenPower components, create more choice, foster more applications, and grow the, for want of a better word, ecosystem.

According to an announcement due to be made on Wednesday, to coincide with the start of the Linux Foundation's Open Source Summit in southern California, "IBM’s opening of the implementation rights, inclusive of patents, to the POWER ISA gives hardware developers a royalty-free approach to build around a commercially-driven CPU architecture with enterprise-ready features and security."

Furthermore, the Linux Foundation will take OpenPower under its wing. IBM will also open up its OpenCAPI and Open Memory Interface protocols – used for connecting processors to high-speed accelerators, IO devices, and RAM – and release an implementation of its Power ISA for FPGAs. The latter will be a useful starting point for designers, with the emphasis on starting point. A processor is much more than an ISA. Decent chips need caches, branch predictors and speculative execution engines, hardware controllers, interrupt logic, privilege checkers, memory management units, interconnects, clock and electrical power regulators, and other gubbins, in order to be useful. The ISA ensures they can all run the same software: you still need all the electronic plumbing around it.

Open is the new open?

If you, like us, wondered what exactly was open about OpenPower until now, IBM is here with an attempt to explain. "OpenPOWER has been focused on creating an open source firmware and software ecosystem and enabling industry partners to build their own system-level products based on IBM POWER processors focused on the data center," a spokesperson said.

"We are now taking the additional step of opening the POWER ISA to allow others to build their own POWER processors for data center or other applications. In addition, we are making contributions of OMI and OpenCAPI implementations as well as a softcore implementation of the POWER ISA to add momentum to the emerging open-source hardware movement."

And when is the opening of the open OpenPower? "It is being announced at the Linux Foundation Open Source Summit on August 21st. The open technologies will be delivered soon afterward," we're told. IBM will also pledge to "work with OpenPOWER and the Linux Foundation to innovate on POWER."

The history of Power and OpenPower has been covered in the past by our friends over at our high-performance computing sister site The Next Platform, though in short: it's a RISC-like architecture that grew out of PowerPC. If you're used to MIPS, Arm64, or RISC-V code, it looks normal. Power9 processors today fill the racks of the world's fastest publicly known supercomputers, America's Summit and Sierra.

And despite its partnerships with Nvidia and Mellanox, bringing in their specialist accelerators and hardware, and wins in the supercomputing world, it is fair to say IBM is not leading the pack with OpenPower in the server and data center world. Intel's x86 is too dominant, AMD is bringing up the rear with its second-generation Epyc, and Arm is lurking in the back waiting to pounce on edge and cloud boxes. It would be stupid to say OpenPower is completely hopeless – we've heard no complaints about the architecture, and IBM's Power sales aren't that bad, all things considered – but life could be a lot better.

One way it could improve is to be truly open, allowing other players to have a crack at designing and customizing OpenPower processors, without having to mess around with licenses and royalties, and expand the market and ecosystem. But your humble hack doesn't think this is about toppling Intel or AMD, not directly, anyway. The clue, perhaps, is in the quote above from a spokesperson: "the emerging open-source hardware movement."

IBM is clearly following in the footsteps of the RISC-V Foundation, which is disrupting, or threatening to disrupt, the embedded and specialist processor space, and is keeping Arm on its toes.

RISC-V is an open-source, royalty free processor ISA: people can implement their own RISC-V-compatible processors, and choose to keep the designs closed or open. Quite a few cores end up open, encouraging more to participate in the ecosystem, customizing and improving designs, and contributing back. SiFive will let you configure and order a RISC-V system-on-chip from your browser. Big names, such as Google, Qualcomm, Nvidia, Samsung, Western Digital, are backing it. The platform has an increasing amount of buzz around it. Google was also a big backer of OpenPower when it launched, we note.

Look no further than Alibaba touting a 16-core, 64-bit, 2.5GHz 12nm RISC-V processor, and mulling making the blueprints open source. Perhaps IBM wants in on that excitement. It wants OpenPower to get a bit of momentum under it. It wants to pull the pin, toss the grenade, and cause a bit of a shakeup with another open ISA in the mix – one associated with high-performance computing, too. Anything to spur even a little more interest in its technology.

Curiously, a few years back, OpenPower's oversight body, the OpenPower Foundation, licensed IBM's processor designs – the actual chip blueprints, not just the ISA – to anyone interested, mainly Chinese organizations seeking to develop and use homegrown CPUs in servers and the like. That led to some unsavory types getting their hands on Power-based technology, such as manufacturers of surveillance equipment based in the Middle Kingdom.

It's unlikely revelations of Power CPUs' applications drove Big Blue to open up the whole ISA to all: if anything, IBM is making its processor technology available to everyone, miscreants and do-gooders included, rather than withdrawing it from use.

RISC-V implementations and specifications seem to be quietly flying under the radar into China from the US, while the likes of Huawei are being used as gigantic bargaining chips. Perhaps IBM wants to glide in behind RISC-V, open up its ISA as a royalty-free open specification, and drop its documentation into as many hands as it can, in any country it can legally deal with, without any politics getting in the way.

We're just speculating here; it could be a mix of all or none of the above. We've asked IBM for more clarification.

Finally, you cannot discount the Red Hat effect. Though IBM is no stranger to open-source software, perhaps its takeover of the Linux distro maker was a catalyst for, or part of, its decision to throw open, er, OpenPower, which was backed early on by Red Hat.

IBM has nothing to lose; the pin is pulled, where will the grenade land? ®

Pssst... Timothy Prickett Morgan has more background and analysis today on the OpenPower announcement over on The Next Platform.