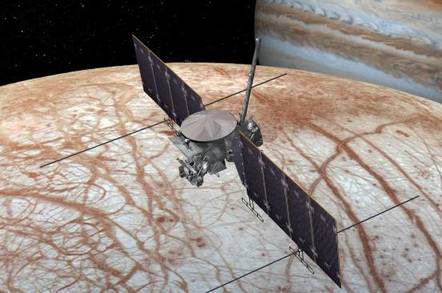 NASA has confirmed its Europa Clipper spacecraft will head off to the Jovian moon in search of signs of life and a landing zone for future exploration.

Europa has fascinated astroboffins since it was discovered that the moon has an ocean albeit one under a thick layer of ice. The water, it turns out, is heated, and kept liquid, as a result of the incredible gravitational pressure from nearby Jupiter. Scientists think that if there is life as we know it in the Solar System, Europa is a top spot for it to be found, thanks to its warm body of water.

"We are all excited about the decision that moves the Europa Clipper mission one key step closer to unlocking the mysteries of this ocean world," said Thomas Zurbuchen, associate administrator for the Science Mission Directorate at NASA Headquarters in Washington DC.

"We are building upon the scientific insights received from the flagship Galileo and Cassini spacecraft and working to advance our understanding of our cosmic origin, and even life elsewhere."

The American space agency said on Tuesday it had completed the probe's final design details, and construction of the Clipper can now begin. It is scheduled for launch in 2023, though that date is likely to slip to 2025 due to NASA’s ongoing rocketry problems.

The Clipper was due to be launched on NASA’s Space Launch System (SLS), a mega-rocket – imagine a Saturn with two boosters strapped to the sides a la the Space Shuttle – that would be capable of boosting the Clipper to Jupiter very quickly. However, the SLS is running behind schedule and way over budget, so either the launch date could slip or the probe could piggyback on another rocket and just get to Europa much more slowly.

Which might be no bad thing. The European Space Agency has a Europa mission of its own, the JUpiter ICy moons Explorer (JUICE), which is due for launch in 2022 and will use gravity assists from planets to reach the Jovian moon Ganymede in 2029. The Clipper would get to the gas giant using a more direct route in about three years from launch, using the power of the SLS. However, with Clipper using a weaker rocket, the two spacecraft will arrive in Jupiter's neighborhood at around the same time, allowing for better data correlation.

Not that the spacecraft will be in an easy working environment: Europa lies within the radiation belts encircling Jupiter, and the Clipper will be carrying 150kg (331lb) of titanium armor to protect its sensitive instruments. Even that isn’t going to be enough, so rather than stay in constant orbit around Europa, the American craft will circle Jupiter, and just do flybys of the moon to minimize radiation exposure.

The Clipper will use radar to map out the surface of Europa for possible landing spots for future missions, so long as Arthur C Clarke was wrong and there is no black monolith in the way. This could be tricky because, although Europa looks relatively smooth, boffins now think the surface is very spiky indeed. ®