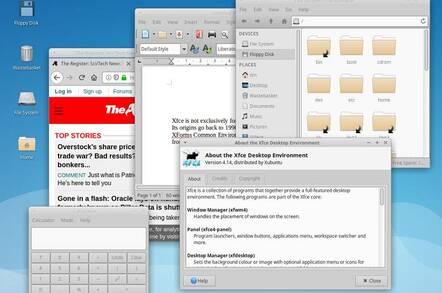 In contrast to the frenetic pace of updates now typical in the software industry, the team behind Xfce, a lightweight desktop for Linux, have released version 4.14 nearly four-and-a-half years since the last stable release, 4.12.

Xfce aims to be fast, consume minimal resources and embody the UNIX philosophy of modularity. Its features include a window manager, a desktop manager, a file manager and an application finder.

The product is not exclusively for Linux, but works on other UNIX-like operating systems including FreeBSD. Its origins go back to 1996, when it was created by Olivier Fourdan. The name initially stood for XForms Common Environment but is no longer relevant since in 2003 the project was converted to the GNOME Toolkit (Gtk).

Don't expect a ton of new features in version 4.14, but the announcement does refer to fixing "a boatload of bugs". The main goal was to port core components to Gtk 3 and from D-Bus Glib to GDBus, these last being client libraries for the Desktop Bus communication mechanism. Xfce's slow pace of development is entirely in keeping with its minimalist approach.

There are some features that users will notice, including an improved display dialogue with support for saving and restoring multi-screen configurations, an updated file manager, better support for keyboard (as opposed to mouse) users, a screensaver, and official adoption of a file search tool called Catfish. The complete list of changes and bug fixes is here.

Although 4.14 has been released, it will not immediately appear for users of systems like Xubuntu (a version of Ubuntu that uses Xfce) as it takes some time for distro-specific packages to be updated. That said, we installed 4.14 on Xubuntu by opting into the Staging PPA (Personal Package Archive), and wrote this piece on LibreOffice, which is part of the Xubuntu default installation.

Why would you use Xfce? The main reason would be either because it runs better on old or low-end hardware than systems like GNOME Desktop (used by the main Ubuntu distribution) and KDE, or because you prefer its performance and minimalist approach.®

It's been a lean month for Microsoft's Visual Studio Code, but look! Remote Development