Just what is Patrick Byrne's role in the Deep State? He's here to tell you 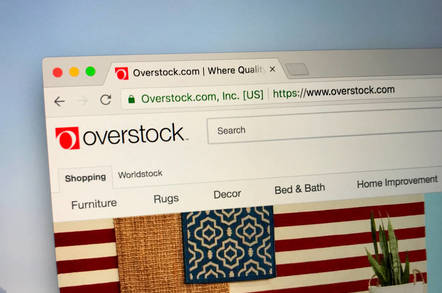 Comment How much of a company's value is tied up in its leadership?

Well, in the case of excess stock reseller Overstock.com it appears to be somewhere between 27 and 38 per cent – because that's how much its stock plummeted after CEO Patrick Byrne published what may be the craziest corporate communication the world has seen. And, yes, we're well aware of Elon Musk.

It begins: "Starting in 2015, I (operating under the belief that I was helping legitimate law enforcement efforts) assisted in what are now known as the 'Clinton Investigation' and the ‘Russian Investigation’ (in fact, I am the notorious 'missing Chapter 1' of the Russian investigation)."

Don't worry if you don't know what this seemingly notorious "missing Chapter 1" business is about because it seems that no one, except Byrne, does either. But the mystery quickly deepens:

"It was the third time in my life I helped the Men in Black: the first was when my friend Brian Williams was murdered, and the second was when I helped the M.I.B. shake up Wall Street a decade ago."

This is, by the way, a corporate press release from the CEO of a publicly listed company and not some crazy egg account on Twitter. We'll get to WTF this means in a second, but the statement continues:

"Unfortunately, this third time turned out to be less about law enforcement and more about political espionage conducted against Hillary Clinton and Donald Trump (and to a lesser degree, Marco Rubio and Ted Cruz)."

"In July 2018, I put the pieces together. I immediately (last July) came forward to a Congressman and a senior military officer, to the Department of Justice this April, and (upon my Omaha Rabbi reminding me of my duty as a citizen late this June) to a small set of journalists this summer."

It's pretty much impossible at this point not to start worrying about the state of Byrne's mind. Pretty much everyone starts making inquiries over whether a hacker has got into Overstock's servers…

And then, as it slowly dawns that this is real when the press release remains on the company's website, the stock starts falling. On Monday, it was at $25 apiece. It immediately dropped to $22 on Tuesday. And then, when no correction or explanation from the company appeared and the market started to realize there was a mad man in charge of a public company, it collapsed on Wednesday to a low of $15.75 – an impressive 38 per cent drop in just two days.

To his credit, Patrick Byrne has stuck to part of his statement when he said: "I have fulfilled those citizenship obligations of which my Rabbi reminded me. I will speak no more on the subject."

And he didn't comment, even resisting the urge to splatter his brain farts all over social media. Faced with a 40 per cent drop in share price however, Byrne emerged from his Faraday Cage to give an interview to the New York Times and its story appeared yesterday.

It turns out that his very public meltdown is a result of Byrne being contacted by a journalist and asked about his relationship with Maria Butina – a Russian spy who was caught trying to infiltrate the National Rifle Association (NRA) and through that the Republican Party. She is currently behind bars serving an 18-month espionage sentence.

It turns out that Patrick Byrne had been sucked into Butina's web, including striking up a romantic relationship with her. That fact was due to come out on Monday on – yep – Fox News, and Byrne's response was, well, the press release.

The idea behind the press release, apparently, was that Byrne wanted to "shed light on what he saw as problems in the way top law enforcement officials had handled the government's case against Ms Butina."

That's a very generous interpretation of events given that the release doesn't mention Butina but does go on about Men in Black, his former friend, NBA player Bison Dele aka Brian Williams who died in mysterious circumstances in 2002 and whose body has never been found; as well as Clinton/Trump/Rubio/Cruz.

Objectively, you could say that Byrne appears to have become excessively paranoid and combined that with a generous degree of grandiosity.

But the fact that he was still talking relatively coherently to a New York Times reporter – rather than, say, taking a leave of absence in a padded facility – helped restore some degree of confidence in the company he leads.

Overstock's share price "recovered" to the current level of $18.20. Which is still a drop of 27 per cent pre-press release.

What does he have to say about the Russian agent and his erstwhile lover? He is still "quite fond" of her and suggests that "the best thing" for both Russia and the US would be if she were to "be president of Russia one day."

Yeah, so both feet aren't quite on the ground yet.

Anyway, it turns out that Byrne was in touch with Butina's lawyer, Robert Driscoll, and Driscoll was using Byrne as a character witness for her, urging the Justice Department to examine various claims he had made about the investigation. Those claims appear to exist in the same world as the now-infamous press release.

A quick look back

Want to know more about Byrne history? Of course you do. And it's every bit as colorful as you would imagine.

He got testicular cancer at 22, got treatment and came out of it with a full-on case of carpe diem. He biked across America by himself, did a ton of martial arts, got a PhD in philosophy from Stanford University and then did various thrill-seeking things included going to Beirut during the civil war, running with the bulls in Pamplona and throwing himself into music and poetry and the whole consciousness-expanding thing. Think William Blake, Nietzsche etc.

In 2011, he was sued by another businessman for libel and defamation after Byrne decided, wrongly, that the bloke was "Osama Bin Laden's favorite financier" and part of a global crime syndicate that traversed Colombian drug cartels, the Iranian intelligence services and Pakistan's notorious ISI security services. In other words, more Alice in Wonderland stuff. Byrne had to cough up roughly $1m in damages.

This tendency has not gone unnoticed by reporters covering Overstock over the years with lots of reports noting his "colorful" character amid various other epithets. But it's not everyday that MarketWatch decided to write an opinion piece and titles it: "Overstock CEO spins an insane Russian-spy drama, with himself as the star."

Call us crazy, but we suspect there will be some stakeholder-proposed reforms heading in Overstock's direction soon. ®

Resigns – or punished for telling the truth? Wake up, sheeple!

Ingram Micro cosies up to Overstock.com

Give me your tired, your poor, your huddled masses of unwanted PCs

A new look for Miscreants' Ball

Stock heads toward the 'Big 0'