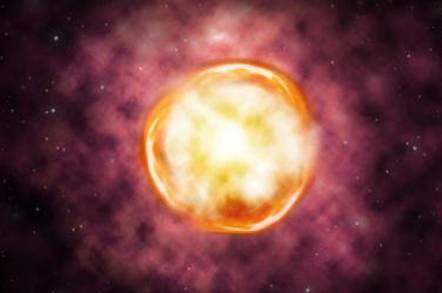 Astronomers have stumbled across the strangest supernova left over from the death of a humongous star 200 times as massive as the Sun. It’s the largest known star to have ended its life in a supernova explosion yet.

A paper published in the Astrophysical Journal written by a team of researchers led by Harvard University, called it a “pair instability explosion” that has “no obvious analog in the existing literature”.

"When we first realized how thoroughly unusual SN2016iet is my reaction was 'whoa – did something go horribly wrong with our data?," said Sebastian Gomez, lead author of the paper and a graduate student at Harvard University. "After a while we determined that SN2016iet is an incredible mystery, located in a previously uncatalogued galaxy one billion light years from Earth."

SN2016iet has properties that have never been observed before. It exudes unusually large amounts of energy over long periods of time, with light curves show that the brightness rises and peaks twice. The flares are separated by 100 days followed by a gradual decline, where the supernova rests for about 650 days before the pattern is repeated again. Spectroscopic data shows that it emits mostly calcium and oxygen and seems to lack hydrogen and helium.

The star behind the supernova explosions seems to have formed in isolation, tucked away in a dwarf galaxy 54,000 light years away from its center. It’s large mass - estimated to be 200 times the mass of the Sun - meant that it was doomed to a short life, burning through 85 per cent of its mass in only a few million years.

The researchers have been observing the explosion for three years since its discovery in 2016. They believe studying the weird object could shed details on how the first stars in the universe that were also monstrous in size might have died.

“The question of how the progenitor star of SN2016iet was created remains an open question. [It’s] so far away from its host galaxy, where most star formation is going on, and it couldn’t have traveled that far away in only 5 million years. If SN2016iet happened in a dim underlying galaxy then it must have exhausted a lot of that galaxy’s gas. We have a Hubble space telescope program to follow up this supernova and see if we can find this underlying host,” Gomez told us. ®