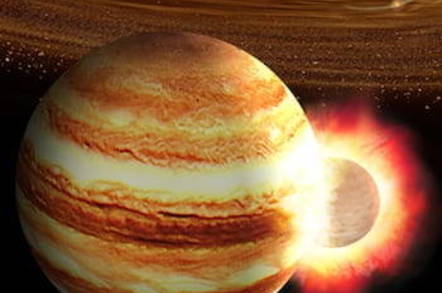 Jupiter may have started life as a dense rocky planet that only became more gas-like after a massive newborn planet smashed right into it 4.5 billion years ago, according to new research.

The paper, published in Nature on Wednesday, describes the scenario. A giant planetary embryo ten times as massive as the Earth, crashed head first into proto-Jupiter as the Solar System's planets were forming in the morass of debris encircling the Sun.

Andrea Isella, co-author of the paper and an assistant professor of astronomy at Rice University in the US, described the impact hypothesis. “Because it’s [the impacting body] dense, and it comes in with a lot of energy, the impactor would be like a bullet that goes through the atmosphere and hits the core head-on.”

The collision breaks would have broken Jupiter’s core and the material inside would be dispersed, making the planet's core less defined and fuzzy like it is now. “Before [the] impact, you have a very dense core, surrounded by atmosphere. The head-on impact spreads things out, diluting the core,” said Isella.

The researchers have good reason to suspect Jupiter was once solid. It is mainly made up of hydrogen and helium, but heavier elements seem to be distributed within a large area stretching to nearly half of Jupiter’s radius. These types of elements are normally assembled during the early stages of a rocky planet's formation. So where did they come from?

“Jupiter’s diluted core, combined with its possible high heavy-element enrichment, thus challenges standard planet-formation theory,” the paper reads. It can be explained, however, if a giant protoplanetary smashed into a solid Jupiter core, spreading the heavier elements apart.

“The only scenario that resulted in a core-density profile similar to what Juno measures today is a head-on impact with a planetary embryo about 10 times more massive than Earth,” said Shang-Fei Liu, first author of the paper and a researcher at Sun Yat-sen University, China.

Further calculations showed that there was a 40 per cent chance that Jupiter would engulf a protoplanet within the first few million years of its life. One as big as ten times the mass of the Earth would have probably crumbled in Jupiter’s atmosphere, but left its mark behind. ®