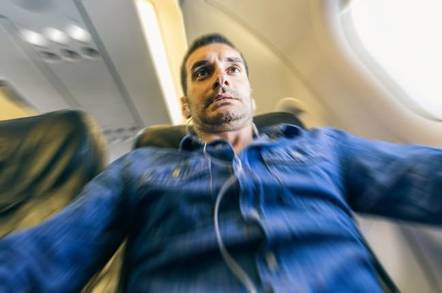 Good news for well-heeled British Airways customers! Now you can transport yourself away from the carrier's aircraft interior through the wizardry of Virtual Reality.

Sadly, the idiot visors only get handed out on the aeroplane so will be of little use to those left to endure the consequences of whatever IT issue has befallen the company's systems on any given day.

After all, who wouldn't enjoy staring at a row of check-in desks unable to process customers?

Still, if you are lucky enough to actually board one of the company's fleet then you could be rewarded with something to take your mind off the delay due to a failure with the flight departure systems. That is: if you're flying from Heathrow to New York... and you're in First.

The Allosky headset features a 1080p resolution panel per eye along with 2D, 3D and 360° capabilities. The field of view is described as "Cinema", which we presume doesn't mean a tall person sitting in front while the child on your left proceeds to rustle through the noisiest snacks in the world.

After all, you can get that experience in BA's economy seats and save yourself a fortune.

Unfortunately, Skylights VR, the company that BA has engaged for this "UK first", is "out of office this week", according to a BA spokesperson, so we can't give you any details questions about the hardware, its actual field of view, refresh rate and so on.

However, the spokesperson did tell us that those passengers should expect around two and a half hours of use from the thing before having to reach for the USB cable. So you might just squeeze one film out of it.

Slightly worryingly for the nauseous, the thing will still work when well-heeled passengers are lying flat on First-Class beds. Presumably the 360° view resets itself or you'll be staring at the sky.

While the gimmick may take a customer's mind off what their four- or even five-figure splash of cash has actually got them in BA's First Class, we think the devices would be far better deployed in the back of the aircraft, to take the minds of those shoehorned for hours at a time into the narrow, uncomfortable seats beloved by airlines these days.

Imagine... Pop on the headset and enjoy a virtual cabin crew that are happy to see you, seats that lack the distressing stains left by the last disappointed passenger, and enjoy a plush cabin free of bits of trim that threaten to fall off during turbulence.

But sadly, it will only be First-Class customers that get the "unique and memorable journey". For the rest of us, the journey will likely be memorable for all the wrong reasons.

As for why it is only in First, a BA spokesperson told us: "We are currently evaluating the use of virtual reality as another form of inflight entertainment. During this trial stage we are keeping our sample sizes small, this lends itself well to our First cabin. As always, we'll evaluate customer feedback throughout. We hope they will love it."

To be fair, BA is planning to spank £6.5bn on improving its aircraft over the next five years, including a refit of 128 long-haul aircraft and adding 72 new aeroplanes to the fleet. Those fortunate enough to fly in Business will no longer have to endure clambering over their neighbour in order to reach the aisle.

Incidentally, you can fly to New York's JFK airport in British Airways First Class tomorrow for £9,443 (according to the company's website). Or you could do it in Economy for £1,581 and buy yourself 15 128GB Oculus Quest headsets and still have change for a night at a hotel not infested with cockroaches and a slap-up meal somewhere in New York.

Although how the cabin crew would react to passengers playing Beat Saber in the aisle is anyone's guess. ®