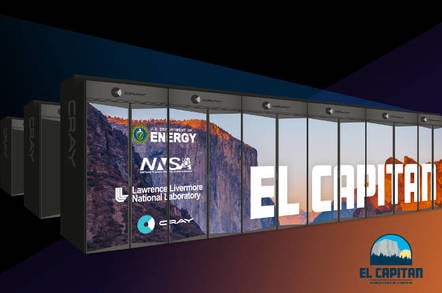 The monster system is expected to roll off the assembly line in late 2022, and, when up and running in 2023, burn through as many as 1.5 quintillion math calculations per second, it is claimed. It will use the Shasta architecture and Slingshot interconnects developed by Cray – which is being slowly gobbled up by HPE for $1.3bn.

El Capitan will be used by the National Nuclear Security Administration, overseen by the US government's Department of Energy, to run "national nuclear security applications" that appear to involve "modeling, simulation and artificial intelligence." It's a lot safer, and within the bounds of treaties, to run simulations of nukes, nuclear material, and reactors than deal with the real thing: just ask the Russians.

Depending on the software running, the exascale super is set crunch numbers roughly 10 ten times faster than the Lawrence Livermore National Laboratory's IBM-Nvidia Sierra, which for now is the world's second-fastest publicly known supercomputer, and about seven times faster than Oak Ridge National Laboratory's IBM-Nvidia Summit, which holds the number-one slot. These two systems are in the US, and bear in mind other nations are due to switch on exascale systems by the time El Capitan spins up.

To the best of our knowledge, there is no official word yet on which processors and accelerators will drive El Capitan: Cray has the option of using IBM Power10 or Power11, Intel Xeons, and AMD Epyc CPUs to run code, and GPUs from AMD, Nvidia, and Intel to run the numbers.

For analysis and commentary on the decision to award Cray the El Capitan contract, head over to our HPC sister site, The Next Platform. ®