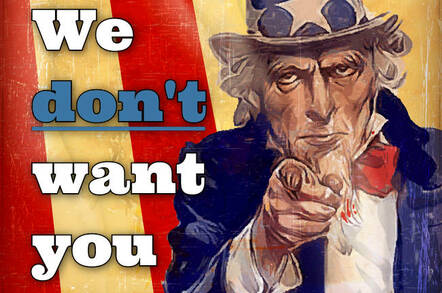 The Trump administration on Monday previewed a pending rule change that will make it more difficult for legal immigrants to obtain green cards or temporary visas in Amerca if they use public benefits like food stamps or Medicaid.

The policy change could affect over a million green card and visa holders in the US and many millions more immigration applicants abroad. It requires those seeking to lawful entry to establish that they will not become "public charges," an ill-defined term that has been applied to those primarily dependent upon government financial assistance.

The policy also applies to aliens seeking seeking an extension or change in immigration status for them and their families.

The term "public charge" has been on the books since 1882 but has had relatively little effect on immigration because Congress already prevents most immigrants from relying on welfare programs, and because it requires most green card applicants have a financial sponsor.

But the term, how it's defined, and to whom it's applied is about to become much more significant for everyone involved in the US immigration system.

The new rule, first published last October for public comment, changes the interpretation of "public charge" by making it apply not just to those currently on government assistance but also to legal immigrants deemed "likely at any time to become a public charge."

If immigration officials determine a prospective immigrant might eventually use some public benefit – federal state, local or tribal – they could deny the application.

But financial means is not the only consideration.

To make a determination – in other words, to predict the future – immigration officials will weigh more than a dozen criteria, which include not only past utilization of public benefits (food stamps, federal housing subsidies, Medicaid, etc.) but factors like age (being over 61 or under 18), debt, a medical condition that might interfere with school or work, and lack of English proficiency.

"The vast majority of the factors that could get you bounced have nothing to do with using any public benefits," said Doug Rand, who served the Obama White House as Assistant Director for Entrepreneurship and co-founded immigration assistance biz Boundless Immigration, in a phone interview with The Register.

Presented on Monday in the US government's Federal Register as an unpublished rule, the new policy is scheduled to be published on Wednesday and to take effect 60 days after that, unless it is halted by a litigation.

Rand believes there will be lawsuits, noting that his organization has already filed comments pointing out numerous legal deficiencies.

The tech sector isn't directly targeted by these rules because those brought over on H-1B and L1 visas tend to have jobs that put them above the financial threshold. However, immigrant tech workers may still have to contend with them. For example, if they apply to change their immigration status, they could be tripped up by the new red-tape and forced to leave. Their spouses or parents could also be blocked from emigrating to the Land of the Free in the footsteps of their engineering or scientific relatives.

That's what happened to a US citizen from Hollywood, Florida, who sought to bring his parents over from Uzbekistan. According to The Miami Herald, immigration authorities were not convinced the parents would not become a public charge, even though the man declared assets of $500,000. The immigration officials determined $1m would be necessary, though federal law reportedly requires only proof of $220,000 in assets.

According to Rand, the US State Department has been testing a watered-down version of the planned rules.

"When USCIS creates a dozen-plus factor test and leaves it to adjudicators, backed by extreme anti-immigration rhetoric, they will know what levers they're supposed to pull," said Rand. "The only thing that's guaranteed is this is going to unleash chaos." ®