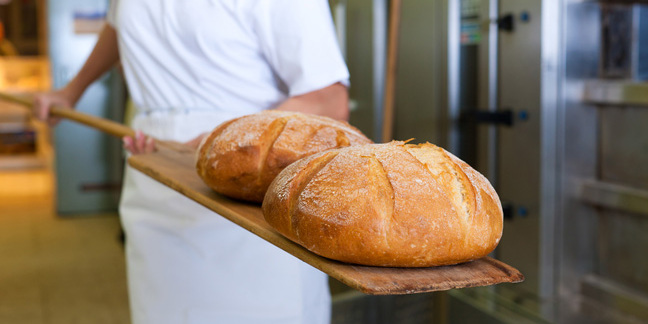 Although it is unlikely that the yeast is entirely that ancient (the team are awaiting gene tests), the results have raised eyebrows.

The yeast was extracted by a process Blackley described as similar to fracking – a nutrient mixture was blasted at pressure into a Middle Kingdom (about 2000 BC) Egyptian ceramic baking jug and left to dislodge the microbes before being vacuumed back up.

Yeast is almost everywhere in the environment so the team had to try to avoid the surface of the pot in order to collect microbes that had been driven into the pottery itself when it was in use in an Egyptian bakery.

The sample has been sent off for a loaf of tests and the plan is to compare it with as many other ancient samples as possible to find similarities and differences with modern yeasts.

But Blackley kept part of the sample and, under sterile conditions, managed to create a bread starter. He fed the yeast sterilised Einkorn flour, an old type of wild wheat grain used by Egyptian bakers – and earlier humans – and said he was amazed at how quickly he created a sourdough starter.

The yeast woke up right away. I was totally surprised. Usually, when you collect a wild yeast sample, you get a horrible, black, gross muck for a few days, and then you start to get the yeast taking over and amplifying, when you get a higher statistical percentage of yeast than other stuff you don't want. In this case, a lot of stuff grew – some stinky stuff – but I could tell there was a ton of yeast growing right away. It was kind of remarkable. On the second day it was bubbling like a real starter. I kept feeding it for the rest of the week because I wanted to be sure that we were only seeing stuff that ate Einkorn. It was a huge pain in the ass. You have to sterilize the flour for a couple of days, make sure that no modern yeast gets into the samples while you're feeding them. Even then, there is a bunch of modern stuff in that sample.

He said the sourdough bread was different to the usual loaves he bakes, admitting that baking with ancient grains often "creates pucks".

This loaf was fluffier, almost cake-like and tasting sweeter with an open crumb structure. He said it smelt yeasty but also of sugar and caramel. While conceding there could be no ancient yeast in the loaf, he said it felt very different from the normal sourdough bread he bakes.

Blackley worked with Egyptologist Serena Love and microbiologist Richard Bowman on the project.

The next stage of the project is extracting yeast from Old Kingdom (2613-2181 BC) ceramics held by a museum in Berkeley, California.

Apart from baking, former Microsoftie Blackley is also considered "the father of the Xbox".

UK readers will also be pleased to hear that his kitchen kit includes a 5,000W transformer allowing him to run 230 volts to his proper British kettle in order to make a proper cup of tea to go with his 4,000-year-old toast. ®