The Register talks to Peter Beck about parachutes, elephants and helicopters 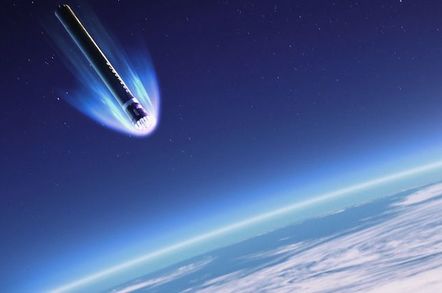 Interview After SpaceX and Roscosmos announced plans to move into the burgeoning small satellite market, Rocket Lab upped the ante with details on how it would be making its own launcher, Electron, reusable.

CEO and founder Peter Beck took to the stage at SmallSat 2019 to make the announcement after first telling the audience: "I find myself in the position of eating my hat."

The announcement, which followed a video extolling Rocket Lab's successes (while lightly skipping over that one they had to explode after telemetry was lost), has come as a bit of a surprise, although the technology to make it happen is not altogether revolutionary.

The eventual plan is to recover the first stage of the Electron, but rather than have a crack at a SpaceX-style propulsive descent, the company is opting for an altogether more passive approach – equipping the stage with a Thermal Protection System (TPS) and parachutes to slow the vehicle as it returns to Earth.

In an interview with The Register, Beck told us that even the lightweight passive approach could result in a "10 to 20 per cent payload reduction in Electron's capability", but added: "We have a number of other performance-increasing programmes to hopefully get that back." If all goes to plan, the payload decrease from today should be "marginal".

As for keeping things passive, Beck explained: "We're trying to orientate the stage in a very blunt entry" – the theory being that those precious engines won't be damaged. "The shockwave will be propagated forward of the nozzles so we don't have such huge local heating."

Beck did, however, admit: "We do have some aerodynamic decelerators to try and scrub as much velocity as we can."

The spent booster would then be plucked from the air by helicopter for transport back to the launch facility for refurbishment and relaunch. Beck optimistically reckoned this could be as little as recharging the batteries and refuelling.

It will be a bit of a challenge. Beck said that the aerodynamic loads alone would be equivalent to perching three elephants atop the Electron stack. We have just the thing if elephants don't float your boat.

To that end, the company is taking a staged approach with the last few missions having already provided important data. The next flight, still set for an unknown date this month, will include recovery instrumentation. The Blackbox Recorder and Useful Telemetry Upload System (BRUTUS) will measure loads all the way down to the ocean.

The upcoming 10th flight of Electron will see the first visible changes to the vehicle, although a good few more launches are needed before the first recovery attempt will be made, according to Beck. The final step in the development sequence will see the team snagging the descending stage by helicopter.

Recovery by parachute and helicopter is not new. The US used aircraft to catch descending payloads from Corona spy satellites in the 1960s, although we cannot help but be impressed by the audacious dreams to recover the first stage of a Saturn V.

Rocket Lab had previously shuffled its feet nervously when reusability came up, pointing to the already wafer-thin margins needed to maximise payload. However, not having to build the things at such a frantic rate will do no harm to increasing launch frequency.

And, of course, drive down costs.

The last point, although not mentioned during Beck's time at the microphone, was underlined by SpaceX announcing some keen pricing for satellites weighing in at 150kg. The plan, which will see Falcon 9s regularly launched on rideshare-only missions, has a starting point of $2.25m with every extra kg costing $15k. Up to 300kg can be launched for $4.5m.

Not to be outdone, Glavkosmos (part of Roscosmos) was quick to cut the 2020 launch price of Cubesats by "almost half" from the $20k-$30k per kilo prices set last year for an "associated payload" on a Soyuz-2.

Beck is not overly concerned about the shenanigans of the competition. "People that come to us want a dedicated orbit, dedicated timeline, and a white glove service," he said, highlighting launch frequency as "the most important thing".

He did, however, admit: "We expect that a reused vehicle will be less expensive than a brand-new one. Depending on how much refurbishment you end up having to actually do..."

Recovery operations will kick off at the company's New Zealand launch site, where Beck told us that Rocket Lab had more control and scope to experiment. Doing something similar from the upcoming US launch site at Wallops is in the pipeline "if the range will allow us to do it".

The window for the eighth launch of the Electron, dubbed "Look Ma, No Hands", opens on 16 August. ®