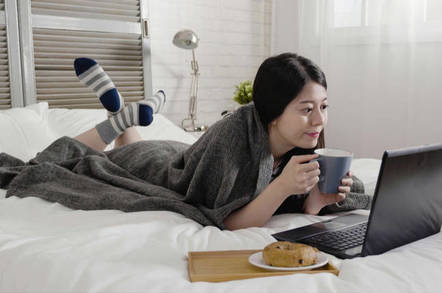 People in the UK are gawping at their gogglebox an average of three hours and 12 minutes per day – 49 minutes less than in 2012 – thanks to online streaming, according to a report from Ofcom.

The regulator's weighty Media Nations report (PDF) into the major trends in UK television found the number households signed up to streaming services increased from 11.2 million in 2018 to 13.3 million in 2019.

Last year UK ISP Sky said it plans to make all its channels and content available online, giving customers the option of doing away with its iconic satellite dish.

However, it seems punters still can't get enough of traditional "water cooler" programmes. The BBC's police drama Line of Duty and the interminable search for "H" was the most-watched programme in 2019 so far with 12.1 million viewing the final episode. Meanwhile, Brit TV showrunner Jed Mercurio's other major hit, Bodyguard, was the most watched drama in 2018, with 14.3 million viewers for its final episode.

Separately, the take-up of smart speakers also seems to be threatening radio broadcasters.

According to the research, 20 per cent of UK households now own a smart speaker such as an Amazon Echo, Google Home or Apple HomePod.

The most common use of smart speakers is to listen to music via a streaming service (69 per cent) while 56 per cent listen to live radio and 22 per cent to podcasts.

Yih-Choung Teh, strategy and research group director at Ofcom, said: "The way we watch TV is changing faster than ever before. In the space of seven years, streaming services have grown from nothing to reach nearly half of British homes.

"But traditional broadcasters still have a vital role to play, producing the kind of brilliant UK programmes that overseas tech giants struggle to match. We want to sustain that content for future generations, so we're leading a nationwide debate on the future of public service broadcasting." ®