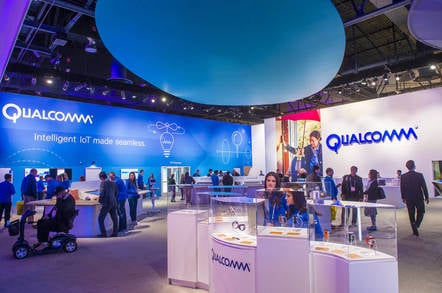 Black Hat It is possible to thoroughly hijack a nearby vulnerable Qualcomm-based Android phone, tablet, or similar gadget, via Wi-Fi, we learned on Monday. This likely affects millions of Android devices.

Specifically, the following two security holes, dubbed Qualpwn and found by Tencent's Blade Team, can be leveraged one after the other to potentially take over a handheld:

Thus, it is possible for a miscreant to join a nearby wireless network, seek out a vulnerable Qualcomm-powered Android device on the same Wi-Fi network, and send malicious packets over the air to the victim to exploit CVE-2019-10540. Next, the hacker can either compromise the cellular modem and spy on it, and/or exploit CVE-2019-10538 to take over the whole operating system at the kernel level to snoop on the owner's every activity and move.

Both bugs are confirmed by Tencent to exist in Google Pixel 2 and 3 devices, and anything using a Qualcomm Snapdragon 835 and 845. Meanwhile, Qualy, in its own advisory released on Monday, revealed many more of its chips – which are used in hundreds of millions of Android devices – are at risk, all the way up to its top-of-the-line Snapdragon 855. Basically, if your phone or tablet uses a recent Qualcomm chipset, it's probably at risk.

The good news is that all the bugs have been patched by Qualcomm. CVE-2019-10538 lies within Qualy's open-source Linux kernel driver, and is available from Google. CVE-2019-10539 and CVE-2019-10540 are patched in Qualcomm's closed-source Wi-Fi controller firmware, which was distributed to device makers in June after Tencent privately alerts the chip designer in April.

Now for the bad news. When exactly these fixes will filter down to actual Android users is not clear: if you're using a supported Google-branded device, you should be able to pick up the updates as part of this month's security patch batch. If not, you're at the mercy of your device maker, and possibly cellular operator, to test, approve, and distribute the updates to punters.

Full details on the bugs and how they can be exploited are not public, and no exploits have been spotted in the wild. There is more good news: there are also various security hurdles to clear, within the Linux kernel and the Wi-Fi firmware, such as stack cookies and non-executable data areas before exploitation is successful. In other words, it is non-trivial to exploit Qualpwn, but not impossible.

Tencent's Peter Pi and NCC Group consultant Xiling Gong plan to describe the pair of programming blunders during talks at the Black Hat and DEF CON hacking conferences this week in Las Vegas.

Also out this week from Google are more security fixes for various parts of Android. The worst can be exploited by maliciously crafted media messages to take over a device.

Also, as for devices with Broadcom-based Bluetooth electronics: it's possible to pwn the gizmos over the air via malicious data packets, which seems pretty bad and worthy of a story on its own.

Here's a swift summary of the bugs:

Again, if you're using an officially supported Google-branded device, you should be getting these updates over the air soon if not already. If you're not, then, well, look for updates soon from your manufacturer and/or cellular network provider, or hope they can be installed automatically via Google Play services if they are not too low level. ®