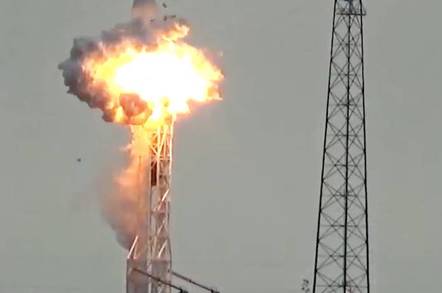 Roundup Space fans enjoyed a busy week thanks to a plethora of spacecraft attached to the International Space Station, India continuing its journey to the Moon and SpaceX teasing its next launch.

Rocket fanciers hoping for a Falcon 9 launch were to be disappointed as SpaceX called it off over the weekend. An issue found with a valve following last week's static firing meant the company had to replace the faulty item.

The company was aiming for a 6 August launch of the Amos-17 satellite from Cape Canaveral Air Force Station's SLC-40 pad.

Static fire test of Falcon 9 complete—team is now working toward August 6 for launch of AMOS-17 from Pad 40 in Florida, pending Range availability

Every launch is significant, but this one is possibly more so for a number of reasons.

Firstly, SpaceX accidentally blew up the earlier Amos-6 satellite on the launchpad back in 2016 thanks to the company's habit of having the payload attached to the rocket during static fire testing. It doesn't do that anymore.

Handy, since Amos-17 has required two such tests so far.

Secondly, this will be the third use of this particular Falcon 9 first stage, which saw action on the Telstar 19 VANTAGE and Es'hail-2 missions. This time around the performance required to put the Israeli communications satellite into the required orbit means that SpaceX won't be attempting a recovery of the stage.

Finally, the weekend marked 11 years since the failure of the company's third Falcon 1 rocket. While the Merlin engine did its stuff, a botched stage separation meant the first stage reconnected with the second and the company failed, once again, to reach orbit. It would be fourth time lucky as the upstart rocketeers stared into the abyss.

Head honcho Elon Musk was in reflective mood over the weekend.

That was our last chance to reach orbit. If it had failed, SpaceX would have died.

But not so reflective that he was unable to plug an upcoming 24 August update on the progress of his Starship monster rocket.

Mutterings that NASA might be taking the concept a tad more seriously while its own super heavy lifter, the SLS, struggles illustrates just how far the company has come.

While SpaceX tiptoed around the launch of Amos-17, the company's Dragon spacecraft was successfully captured and attached to the International Space Station (ISS).

It joined the Northrop Grumman Cygnus freighter, named for astronaut Roger Chaffee, which was bolted to the orbiting outpost in April. The Cygnus is due to depart shortly, freeing up the Earth-facing Harmony port.

Unlike the Cygnus, which will not survive its fiery return to Earth, SpaceX's Dragon is capable of transporting payload safely to a splashdown in the ocean. After a month attached to the laboratory, the freighter will be charged with returning a cargo of mice from the station among the ISS parts and experiment results also loaded aboard.

The two freighters have also been joined by a Russian Progress freighter which docked to the outpost's Pirs docking port a mere three hours and 19 minutes after launching from Kazakhstan. The uncrewed spacecraft, designated 73P, carried three tons of supplies and will remain docked for four months before being filled with rubbish and sent to burn up in the Earth's atmosphere.

The Progress will share space on the Russian segment with the uncrewed Soyuz MS-14, due to launch before the end of the month as part of a test of the 2.1a Soyuz booster. MS-14 will be docked to the Poisk docking port (assuming the launch goes as planned) and parachute back to Earth two weeks later ahead of Roscosmos, possibly using the rocket to launch astronauts and cosmonauts later in 2020.

Intelsat: it was the micrometeoroid wot dunnit. Maybe

Hidden away in Intelsat's quarterly earning commentary (PDF) was a terse summary of the investigation into the 7 April Intelsat 29e "anomaly".

At the time, it appeared that a mystery fuel leak followed by something altogether more catastrophic befell the stricken spacecraft. According to the failure review board: "The anomaly was either caused by a harness flaw in conjunction with an electrostatic discharge event related to solar weather activity, or the impact of a micrometeoroid."

The former indicates a potential issue with the design of the satellite while the latter is just plain bad luck. Intelset 29e is (or was) a Boeing 702 Medium Power Series spacecraft. Intelsat operates another six of the things and reckoned there was a "very low risk of a similar event occurring".

ISRO: Onward, to the Moon!

Finally, the Indian space agency, ISRO, was pleased as punch to confirm that the Chandrayaan-2 orbiter/lander/rover combo had successfully completed its fourth and penultimate orbit raising manoeuvre.

A final firing on 6 August should be enough to see the spacecraft eventually captured by the Moon's sphere of influence ahead of a planned September landing.

Boffins minding the probe have busied themselves with snapshots of Earth because, well, who wouldn't?