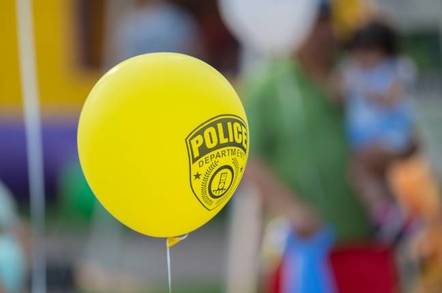 Uncle Sam is testing a system that uses high-altitude balloons to conduct surveillance over American soil.

Government contractor Sierra Nevada Corporation – the aerospace company, not the brewery – has released balloons that will drift over a large area in the United States' Midwest, and form a network capable of monitoring and tracking activity on the ground over massive distances.

The Pentagon-ordered tests, involving 25 balloons cruising at 65,000-odd feet, will run from July 12 to September 1. It is understood the craft are carrying radar equipment to track the movement of vehicles far below.

Mid-July, Sierra Nevada successfully filed the necessary paperwork with America's comms watchdog, the FCC, to obtain permits for wireless communications from the balloons. They will float over South Dakota and then move into neighboring Iowa, Minnesota, Wisconsin, Missouri, and Illinois. The filings sought permission for Sierra Nevada to use various radio frequencies over the area as well as inform those who are in the flight path of the trial.

Sierra Nevada did not return a request for comment on the report, though the FCC filing includes a passage in which the biz provides a brief description of its activities, stating it wants to "conduct high altitude MESH networking tests over South Dakota to provide a persistent surveillance system to locate and deter narcotic trafficking and homeland security threats."

Meanwhile, The Guardian newspaper today noted that Sierra Nevada's other contracts with the US government are for small aircraft that have been equipped with cameras and sensors and used to provide images and surveillance in Mexico, Central America, and the Caribbean.

It would stand to reason, then, that the balloon network would be designed to operate alongside, or as a replacement for, these light aircraft. By operating at 65,000 feet (19,812 meters) and using solar panels to power its radar and surveillance systems, the unmanned balloons would be able to stay in the air for days, far longer periods than the planes would.

They would also, however, raise privacy concerns, particularly in this trial as the massive balloon network is going to be operated over populated American cities. Privacy advocates will be less than-thrilled to learn that the US military's unmanned observation craft are floating over large parts of the Midwest. ®