System tracks who's next, but it's no stand-in for a good bartender's judgment 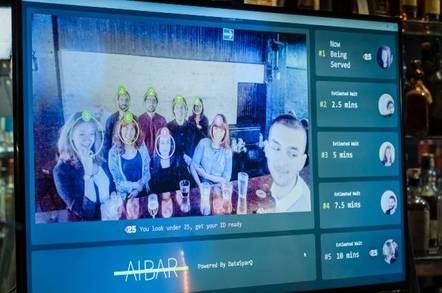 Pics and video A British firm thinks it has found the answer to an age-old problem – how to decide which boozed-up revellers should get served at the bar first.

It works like this. A webcam constantly scans the crowd of eager punters wanting to get a drink and sorts them out in the order in which it first spotted them. They are assigned a number, which appears on a large behind-the-bar display hovering over their heads so that people can see when they're going to be served and bar staff can also check the order on iPads.

The scheme, hatched by London startup DataSparQ, has installed AI Bar in City hostelry 5cc Harrild & Sons. The system can also be configured to alert staff if customers appear to be underage and allow people to link their face to a specific tab.

"Queuing is a part of British life that we all have to endure – but we wanted to do something to improve the experience," said John Wyllie, MD at DataSparQ, in a canned quote.

Wyllie said that his biz was in talks with drinks companies and pub chain owners, as well as festival organisers. It will cost publicans £199 a month to install and operate, and requires a display, a webcam and a standard broadband connection.

DataSparQ insists that this isn't just some pie-in-the-sky plan, but one that solves a genuine need. According to research commissioned by DataSparQ, the average Brit spends over two months queuing for drinks over their lifetime. Presumably they didn't speak to teetotallers.

The biz also claims that the system will speed up the service at bars, saying the typical British boozer could server 1,600 more pints a year using AI Bar, amounting to 78 million additional pints poured a year if rolled out nationally. The biz even went as far as to claim that queuing is the biggest problem facing the world today in this hilariously bad promotional video – in your face, climate emergency!

Like many AI plans, this is a beautiful idea slayed by an inconvenient fact or two. As anyone who has worked behind a bar (this hack included – Fortescue Inn, Salcombe represent!) will tell you that this scheme could actually be counterproductive.

Any bartender worth their salt knows the rough sequence in which orders should be taken. Yes, a few can be swayed by a pretty face, and pub regulars can get preferential treatment because – you know – they spend a lot of money there. But it's also an important part of the job to regulate who doesn't get served.

The Great British Curry: Put down the takeaway, you're cooking tonight

The blatantly wankered punter who you know is going to ask for tequila shots? Suddenly invisible. The one who gets lairy with other customers and can't keep their hands to themselves. They can find somewhere else to drink. And the posh git holding up a £20 note like this buys them your attention? Get ready for a long wait.

This complex diplomacy and sorting system is carried out by every good bartender, using a standard-issue MK1 brain. Paying someone an extra £2,400 a year (plus hardware) to obviate this so belligerent drunks can claim they must be served isn't going to make the bar better.

There are encouraging parts to DataSparQ's pitch, however. Facial scans will only be held for 24 hours at most, which is a good sign, and the system apparently works on bog-standard hardware.

But seriously, this does nothing more than what any reasonable quality bar person could do, and we suspect the false positive rate on such a system would make the claimed efficiency savings moot. ®