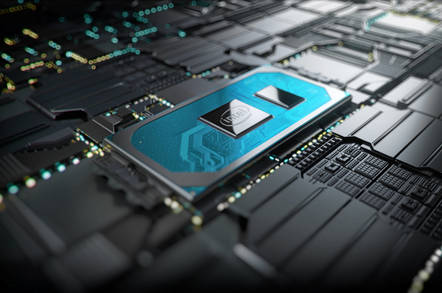 Intel today waved its arms around in the air to remind us it has another family of products coming later this year – after quietly swinging the axe on another one.

Chipzilla on Thursday teased a few more details about 11 of its forthcoming 10nm 10th-generation Core processors code-named Ice Lake, which are due to land in laptops and notebooks shipping at the end of the year – specifically, its U- and Y-series. With the exception of three dual-core i3 models, all will have four CPU cores (and eight hardware threads, four of which you may want to turn off for security reasons).

Once more with feeling

These Ice Lake parts will be Intel's first proper much-delayed 10nm processors after it limped out a wimpy 10nm dual-core i3 code-named Cannon Lake in 2018 with no working integrated GPU for Chinese laptops.

This year's lineup will, thus, be Intel's first real crop of 10nm chips, using Sunny Cove cores, when they arrive, of course. They will also, depending on the model, sport 11th-generation Intel integrated GPUs that can achieve up to 1 TFLOPS of performance, apparently, as well as support instructions for AI-based applications.

"10th Gen Intel Core processors are foundational to Intel’s journey in enabling uncompromising and workload-optimized PC platforms with performance leadership across all vectors of computing," Intel gushed in hyping its forthcoming silicon.

Down the wrong path

Meanwhile, Intel's HPC portfolio just got a bit lighter as Chipzilla has formally put an end to its in-development 200Gb/s Omni-Path 200 interconnect system, which was aimed at HPC and supercomputer clusters. Intel will continue to sell and support the 100Gb Omni-Path lineup.

As The Register's sister publication The Next Platform pointed out earlier today, the move away from the high-speed Omni-Parth is hardly unexpected.

With the recent acquisition of Barefoot Networks and the decision to cut Omni-Path 200 out of high-profile projects, such as the Argonne National Labs Aurora super, it was clear Chipzilla wanted to move in a different direction to shift bits.

"It would be easy to assume that Intel will be switching to more of an offload model going forward now that it is buying Barefoot Networks," noted TNP co-editor and former Reg man Timothy Prickett-Morgan.

"But it is just as likely that Intel will let companies decide, using P4 as a means of running the same algorithms either scattered across CPUs in the cluster or centralized on the switches. Or maybe a little of both where it is warranted." ®