As many as 100,000 IBM staff axed in recent years as Big Blue battles to reinvent itself from IT's 'old fuddy duddy' 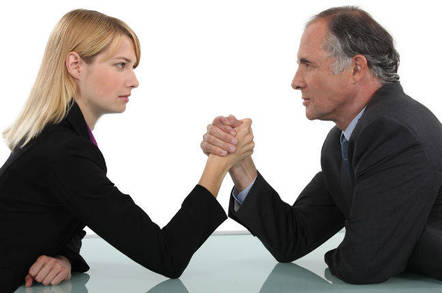 An ongoing age-discrimination lawsuit against IBM by one of its former star cloud salesmen has this week blown the lid off Big Blue's inner struggle to reinvent itself as a hip'n'cool place for millennials.

Buried in court paperwork filed by lawyers acting on behalf of ex-IBMer Jonathan Langley, is, among other explosive insights, the revelation by one-time IBM HR veep Alan Wild that 50,000 to 100,000 Big Blue staff have been axed in the past five or so years. In their place, adults in their twenties, who typically flock to the likes of Amazon, Microsoft, Google, Facebook, Netflix, Salesforce, Apple, Adobe, Oracle, Intel, LinkedIn, SAP, Uber, Boeing, HP, and so on, rather than IBM.

The enterprise tech titan fears it is therefore missing out on top emerging talent, and is battling to make its workplace more enticing for uni grads. Older employees are bearing the brunt, it is alleged.

Langley, who was let go from IBM at the age of 59 in 2017, last year sued the venerable computing giant in Texas, USA, accusing it of unfairly ditching older capable staff to replace them with so-called early professional hires, which is IBM code for people who obtained their degree within the past three years.

IBM denies any wrongdoing, and says it does not discriminate on age – however, when testifying under oath for the court case, Wild, who left Big Blue in late 2018, appeared to contradict the IT giant's position.

Wild said in his deposition that IBM wanted potential hires to see Big Blue not as “an old fuddy duddy organization,” but as “cool and trendy” instead. To do that, IBM set out to slough off large portions of its older workforce using rolling layoffs over the course of several years, Langley alleges.

As a result, IBM has laid off between 50,000 and 100,000 employees – a little under a third of its global workforce – while aggressively hiring as well. As a result, around 50 per cent of its staff have been hired in the past five years, and now half of its total workforce are millennials, according to Big Blue’s CEO Ginni Rometty.

An internal slide, submitted to the courts by Langley's team, detailed the technology behemoth's efforts to "correct [its] seniority mix," as in: increase the numbers of young staff and decrease the number of older workers. IBM's legal eagles argued "seniority" in this instance refers to staff rank within the organization, and not age.

Wild said he was shocked to discover IBM had assembled a hiring review board of very senior executives, including IBM’s talent director and head of Hybrid Cloud HR Sam Ladah, the same division's CFO Stephen Lasher, and SVP Robert LeBlanc. This group was apparently in place to ensure older staff were blocked from moving to other positions within IBM when they were made redundant, no matter what their qualifications and skills were, Langley's team claimed.

Wild stated that once IBM officials had made the decision to lay someone off, they took every step possible to ensure that worker's future within Big Blue was over. Wild “stated under oath this is a practice extremely outside of the norm for HR business standards,” according to the plaintiff's court documents [PDF] which were filed on Tuesday to oppose IBM's request for a summary judgment.

Langley, who declined to comment amid the ongoing litigation, was a long-standing IBM Hybrid Cloud salesperson until he was selected to be laid off – despite performing so well, he bagged the biggest bonus on his team in the quarter before he was axed. Other managers have testified that they tried to rehire Langley after he was chopped, and were blocked from doing so.

A spokesperson for IBM told us it has "transitioned to a less labor-intensive business model and have divested some of our operations," adding:

"The company hires 50,000 employees each year, and spends nearly a half-billion dollars on training our team. We also receive more than 8,000 job applications every day, the highest rate that we've ever experienced, so there's clear excitement about IBM's strategy and direction for the future." ®