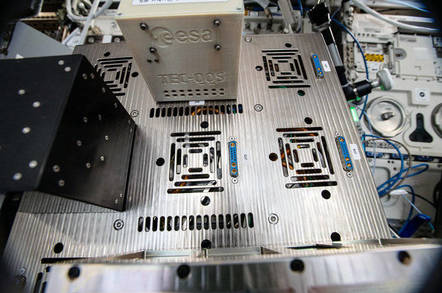 The cryptographic cube module, in beige (Image via ESA)

The European Space Agency (ESA) unveiled an experiment it hopes will overcome the problems that prevent encrypted communications between the Earth and orbiting spacecraft.

The Cryptographic ICE Cube, launched into orbit in April as part of the NG-11 mission, has been installed on the ISS' Columbus laboratory and is currently being controlled from the ground by researchers in the Netherlands.

ESA says the experiment has recently begun to return data that will be analyzed and shared with CERN. Full testing will begin later in August and is scheduled to run for at least a year.

The aim of the mission, says ESA software product assurance engineer Emmanuel Lesser, is to overcome the hurdles that solar radiation presents for encrypted communications. Specifically, the way encryption keys can be scrambled when radiation hits the memory chips doing the communicating while on orbital spacecraft.

"In orbit the problem has been that space radiation effects can compromise the key within computer memory causing ‘bit-flips’," he explained .

"This disrupts the communication, as the key on ground and the one in space no longer match. Up to now this had been a problem that requires dedicated, and expensive, rad-hardened devices to overcome."

Because that bulky and expensive radiation-hardened equipment is not practical for use with most satellites, communications can't be encrypted, creating a potential security issue as more technologies are looking to use satellite communication. This means researchers must find a way to establish and maintain encrypted connections on standard, cheap hardware.

To solve the problem, ESA says it is looking at two methods for key exchanges. The first involves the use of a hard-wired base key that cannot be flipped by radiation. That key is in turn used to create new keys on the fly so that scrambled keys can be quickly replaced without slowing down communications.

The second method uses an FPGA to create a series of identical cores that are dedicated to handling encryption keys. The idea is that when one core has its bits flipped by radiation and can't verify the key, another core can be used to verify the keys while the first core resets itself and corrects the flipped bits.

In both cases, ESA says, the hardware requirement is minimal, The unit on the ISS is powered by a Raspberry Pi board stuck inside a plastic casing, while the ground control is done with a laptop that sends commands through the ICE Cubes operation center in Brussels. ®