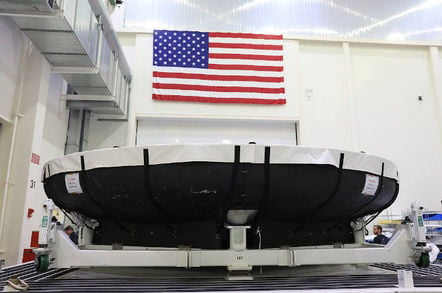 The state-of-the-art heat shield, measuring roughly 16 feet in diameter, will protect astronauts upon re-entry on the second mission of Artemis. Pic: NASA/Glenn Benson

Roundup As the rocket world settled down after the excitement of that Apollo anniversary, there was plenty to keep the faithful entertained last week.

Orion is complete and the Green Run is go

US Vice President "Iron" Mike Pence whipped the covers from the first complete Orion spacecraft, due for an uncrewed lob around the Moon in the coming years.

The Orion is to be flown as part of Artemis 1, which will also be the first flight of NASA's monster SLS rocket.

Should the thing ever get off the ground, of course.

The European Service Module, designed to keep Orion alive during much of the flight, is also complete. The European Space Agency contribution arrived last year, and engineers are still working to connect the two modules together. September is the current target for completion of the work and shipment of the completed stack to a test facility.

While Artemis 1 will not have a crew, Artemis 2 is expected to send astronauts around the Moon and Artemis 3 is planned to see the first boots on the lunar surface in more than 50 years, in 2024.

The problem is that all this exciting Moon stuff needs a powerful rocket and NASA is determined that the SLS is the thing to use. In order to meet the arbitrary deadline of the end of a potential second term for US President Donald Trump 2024, the agency had been looking to find ways of bringing the monstrously delayed monster rocket back on schedule.

One of those was the deletion of the Green Run.

The Green Run is a test that involves mounting the 212-foot tall core stage of the SLS on the B-2 test stand at NASA's Stennis Space Center. The stage will then be pressurised and the four former Space Shuttle RS-25 engines fired to demonstrate that everything works the way it should ahead of the arrival of the SLS at its launch pad.

The B-2 stand had previously seen service for the Saturn V and space shuttle propulsion system. The eventual goal is to run the engines for a full eight-minute test fire.

Obviously, setting up the stage for the test will be time consuming, hence the mutterings about dropping the run. However, a preference for assuring a successful launch first time has prevailed and NASA will indeed validate the core stage behaves as expected.

.@NASA will do a Green Run test for @NASA_SLS prior to #Artemis 1. Here’s why:

NASA administrator Jim Bridenstine insisted that the test was essential to ensure astronaut safety and pick up issues sooner rather than later, both of which are difficult to disagree with. However, his assertion that keeping the test will increase the probability of a Moon landing in 2024 might not age too well.

Fresh from showing off the remains of Britain's only orbital rocket (to date), the Black Arrow, recovered from its Australian resting place, Edinburgh-based Skyrora declared the testing of its full 3D-printed rocket engine a success.

The Scottish outfit used its Cornwall base to carry out the checks on the engine, destined for use by the firm's XL rocket, which has yet to fly. The inaugural launch of the vertical rocket from a British spaceport is tentatively set for 2022.

The three-stage XL is expected to be able to fling a payload of 320kg into a 600km Polar Orbit, with nine liquid fuel engines used in the first stage consuming 32,065kg of propellant.

"Look ma, no hands" – Rocket Lab names the next mission, if not the date

Meanwhile, Rocket Lab confirmed that the next launch of Electron would be in August to carry four satellites into space from the company's New Zealand Launch Complex 1.

The satellites will kick off a new constellation for UNSEENLABS as well as spacecraft for BlackSky and the US Air Force Command.

The UNSEENLABS CubeSat is designed for maritime surveillance, while BlackSky's satellite, Global-4, is designed for Earth imaging. The pair of USAF spacecraft will be testing new technologies.

Far be it from us to challenge Hoffman's assertion, but the company has yet to hit the promised cadence, having managed to launch just three Electrons in 2019. The last launch, "Make It Rain", was on 29 June, and we'd contend that a vague "August" target means it would be easier to measure things in terms of months.

Chandrayaan-2 is on the way to the Moon

The launch came after a delay due to a leak found on the upper stage of the GSLV rocket. Indian officials are still, however, targeting a 7 September landing, meaning that the spacecraft will spend less time in lunar orbit before the lander and rover combination separate to descend to the Moon's surface.

Chandrayaan-2 was placed into an orbit with a perigee of 169.7km and an apogee of 45,475km. That orbit has since been raised using its propulsion system, a process that will continue until the probe enters the Moon's sphere of influence. The thrusters of the spacecraft will then be used to circularise its orbit around the Moon to 100km x 100km before the lander (named Vikram) is separated from the orbiter.

While the orbiter is expected to last for a year, Vikram and its rover (named Pragyan) will only survive for a single lunar day, during which mission controllers plan to explore and conduct experiments at the landing site, a plain between two craters, Manzinus C and Simpelius N, near the lunar south pole. ®