What's that? They found 20 weapons and the landlord was linked to a truck bomb assassination? Oh sheeeeet 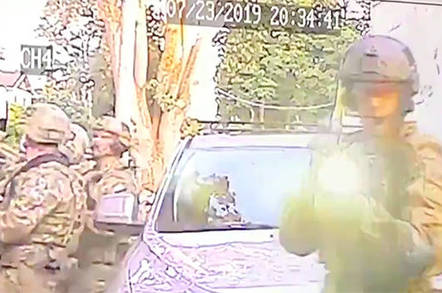 Software engineer Paige Adele Thompson, 33, was cuffed on Monday after the FBI tracked her down to her home address close to Seattle airport and raided it. Her housemates were seemingly unaware of Thompson's alleged illegal activities and provided footage from a number of security cameras in and around the house to local TV news.

That footage shows an extreme amount of force – with nine or 10 men in military outfits and armed with machine guns storming the single-story house. The camouflaged super-plod smashed the glass on two vehicles outside, knocked down the cameras, and caused significant damage in their efforts to arrest Thompson, who was unarmed and went quietly.

Managed to get video of the raid in Seattle that lead to the arrest of Paige Thompson, 33yo software engineer accused of hacking databases and stealing info on 100 million credit card applications for #CapitalOne in a major breach. Housemates share details @ Noon @KIRO7Seattle pic.twitter.com/NXsjfAOInn

The tactics immediately came under fire given that the cops were aware that they were collaring an apparently non-violent alleged hacker. Except...

Except the police later revealed that they have found no less than 20 firearms in the house – including assault rifles and handguns as well as a wide range of related equipment including bumpstocks, scopes, and ammunition. The guns were in a different bedroom to where Thompson, and her computer that she may have used to carry out the hack, were located.

In a bizarre twist, the owner of the house in which Thompson lived with two other housemates, and who is thought to be the owner of the firearms has some alarming prior history. Park Quan, 66, was convicted of possessing explosives in 1983, and of having an unregistered machine gun in 1991. He was reportedly linked to a failed contract killing in which a bomb was attached underneath a pick-up truck but failed to go off.

Quan was charged this week with being a felon in possession of a firearm following Monday's swoop.

The security footage displays the wrong date and time but clearly shows the same house that Thompson lived in on 28th Avenue, south of Seattle, and despite the video saying it is 2000 at night, it is clearly early in the morning: 0600 according to her housemates.

One of the housemates complained to Ranji Sinha of telly news outlet Kiro7 that he had "woke up to a loud bang and was dragged out the house in my pajamas." The other housemate – neither of whom wanted to give their names or show their faces on screen – said that the cops had also taken Thompson's "$10,000 computer" and that she "hadn't worked for some time." They say they had no idea what she was up to and when asked about her motivation suggested that "she did it because she could."

Circa 2015, Thompson, aka "erratic," worked as an engineer for Amazon Web Services, which hosted Capital One's cloud storage servers that she allegedly broke into and downloaded the contents of earlier this year.

The Feds claim she left her fingerprints all over the cyber-theft, including using the same VPN service to siphon off the data from Capital One's AWS S3 buckets and log into her GitHub account, and used her GitHub account – which had the username paigeadelethompson – to post a public Gist explaining how to hack Capital One's S3 buckets, and linked to her GitLab account, which hosted a copy of her resume complete with full name and home address, from her GitHub profile.

And, in a jokey private message, Thompson claimed that she had "basically strapped myself with a bomb vest, fucking dropping Capital Ones [sic] dox and admitting it." Needless to say none of this ended well for her.

The systems engineer has already appeared in court, charged with violating the US Computer Fraud and Abuse Act, and will remain in custody until her next hearing on August 1. She faces up to five years in the clink, and potentially a $250,000 fine, if convicted. She wept in court as these early proceedings unfolded.

In related news, New York's Attorney General Letitia James said on Tuesday that her office had opened an investigation into the hack.

"Though Capital One’s breach was internal, the fact still remains that safeguards were missing that allowed for the illegal access of consumers’ names, Social Security numbers, dates of birth, addresses, and other highly sensitive, personal information.

"It is becoming far too commonplace that financial institutions are susceptible to hacks, begging the questions: Why do these breaches continue to take place? And are companies doing enough to prevent future data breaches?... We cannot allow hacks of this nature to become every day occurrences."

Also, Thompson's Slack messages to pals, obtained by the FBI, list references to data seemingly acquired from other businesses, so this yarn may not end with Capital One. ®

Secrets in Seattle: Apple opening base on Microsoft's doorstep