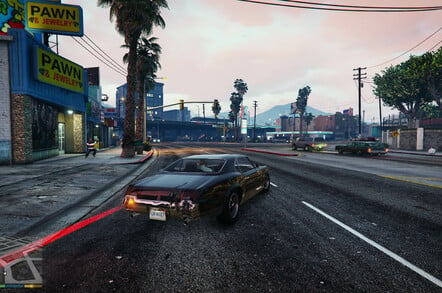 Edinburgh-based Rockstar North – a subsidiary of NYC publisher Take-Two Interactive – is a household name thanks to the astronomical success of its controversial Grand Theft Auto franchise, particularly the fifth instalment, which alone is estimated to have brought in $6bn of revenue since its 2013 launch, making it the most commercially successful product in entertainment history.

But a probing by investigative think tank Tax Watch revealed the studio paid exactly £0 in UK corporation tax between 2009 and 2018 despite reaping £42m in subsidies from the taxpayer between 2015 and 2017.

The financial aid was awarded to Rockstar by the UK government under the Video Games Tax Relief scheme, introduced in 2014 to support Britain's burgeoning games sector, especially the titles identified as "culturally British".

Tax Watch noted this £42m equated to 19 per cent of the total relief paid to the entire UK industry since the programme's start, which it found odd considering the scheme was ostensibly targeted at small and medium-sized businesses.

Rockstar North, on merit of being part of a multinational games publishing empire and responsible for generating revenue in multiple billions on its own, likely qualifies as neither small nor medium.

As for whether Grand Theft Auto V's satirical take on American consumer culture is uniquely British in nature, that's debatable – though the franchise has been made in the UK since its earliest days under Rockstar precursor DMA Design, which was gobbled by Take-Two in 1999.

Tax Watch wryly suggested: "It is unlikely that the drafters of that guidance had in mind a game which allows the player to murder prostitutes when formulating the cultural test."

For those living under a rock, the Grand Theft Auto series, as the name might suggest, positions the player as a criminal in an open world, enabling them to steal cars, kill indiscriminately and pull off heists in pursuit of their goals. It's a lot of fun.

How'd it manage to dodge the corporation tax axe? In 2016, Rockstar North "recorded a large retrospective adjustment for tax paid in previous years," the think tank said. "The effect of tax credits and previous year adjustments means that over 10 years the company recorded a net loss for tax purposes, paid nothing in corporation tax, and claimed £70m in credits from HMRC. The amount of credit claimed by Rockstar North from HMRC was almost six times its operating profit over the period."

Tax Watch director George Turner told The Scotsman: "It is outrageous that the UK taxpayer is being asked to shell out tens of millions of pounds in subsidy to the developers of Grand Theft Auto, when at the time that the game's developers put in their tax credit application Grand Theft Auto V had already generated several billion dollars in sales and profits.

"The video games tax relief was designed to help developers of games with a cultural content that would struggle to sell in the international market. That such a large amount of that relief is going to the developers of Grand Theft Auto clearly shows that it is not working as intended."

Vercetti let loose on the mob

Rides out to defend customers