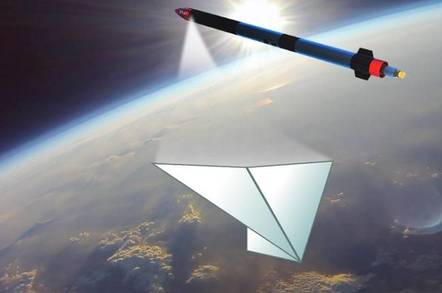 Japanese rocket boffins' hopes of following up a successful third launch of the MOMO Sounding Rocket with MOMO-F4 were dashed over the weekend as the commercial launcher plopped into the sea after a mere 172 seconds of flight.

Longtime Register readers will be interested to note that aboard the rocket, capable of lobbing a 20kg payload to 100km, were a trio of paper aeroplanes containing the names of crowdfunding patrons.

Castem's Takuo Toda was to press the button to release the cargo but things went wrong shortly after liftoff. Rather than release the aeroplanes into space, something Toda has hoped to do for the last decade, an emergency stop command was issued by the onboard computer at the 64.3-second mark, resulting in an apogee of just 13.3km before the rocket rendezvoused with the sea 9km downrange from the launch site in Taiki-cho, Hokkaido.

We, of course, successfully undertook our own Paper Aircraft Released Into Space (PARIS) project from a lofty 89,591ft. Our intrepid Playmonaut then guided Vulture 1 to a safe landing back on Earth. Our attempts to follow up the project with the mighty rocket-powered Vulture 2 in the form of the Low Orbit Helium Assisted Navigator (LOHAN) remain mired in red tape for the time being.

Sadly, Japan-based rocket makers Interstellar Technologies Inc. did not see fit to tap into the tiny brains of we Vultures or the capacious craniums of our readers for tips in how to avoid a premature dunking for the folded wonders.

The failure was the fourth attempt at launching the MOMO rocket. While the first and second launches had also failed (the second dropping back on to the launchpad after a few seconds of flight) the third had managed to reach 113.4km in May, so confidence was high. That feat, according to the modestly named company, made it the fourth private organisation to reach space using a liquid-fuelled rocket and the first non-US outfit to do so.

Sadly for the long list of sponsors, it was not fourth time lucky. Naming rights for the rocket had been snapped up by Paters Inc., which called it "Paters Dream". Masaru Tange paid for an advert on the fairing (and Tange himself got to press the launch button).

In addition to the paper aeroplanes, which were supposed to have been ejected via an in-house release mechanism, an infrasound experiment from Kochi University was onboard, as well as a cheeseburger from Grosebal, 200g of Saza coffee beans and a pair of Owndays glasses. Those lucky, lucky fish.

As for the failure, we don't like to point any fingers, but the following paragraph in the company's press release (PDF) may turn out to be significant:

We will add some of Heiwa Shuzou's (based in Wakayama Prefecture) highest quality "Kiido" Sake to MOMO-F4's rocket fuel. This will be the first time a rocket is launched with fuel containing ethanol extracted from Japanese rice wine.

Certainly, our experience with sake has led to us being unable to maintain a stable course and suffer the odd emergency abort or two as well.

Obviously, the actual cause of the early abort will be revealed in due course once investigations are complete.

Still, the failure has not dented the company's ambitions. It followed up the dunking with an announcement that it has trousered (PDF) an impressive ¥1.22bn during its Series B funding aimed at moving on from the MOMO to the ZERO, which will be capable of flinging 100kg payloads into a 500km sun synchronous orbit, in competition with the likes of Rocket Lab.

Hopefully nobody will be tempted to tip a bottle of sake into LOx-Kerosene fuel of the thing. ®