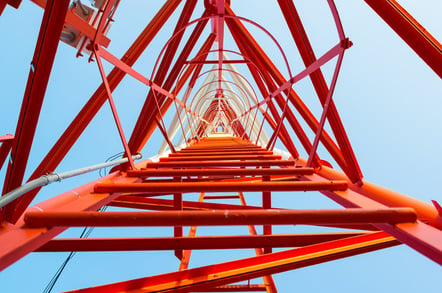 Vodafone is looking to flog off its towers in the next 18 months, the mobile operator revealed in first quarter results ended 30 June (PDF).

Nick Read, Vodafone group chief exec, said the business has started preparations "for a range of monetisation options," including a potential IPO after moving to legally separate the masts.

"We believe there is a substantial opportunity to unlock the embedded value of our towers," he said.

The entity would have earnings before interest, taxation, depreciation and amortisation of around €900m, with its sale helping pay to down Vodafone's debt, said Read.

In its last full year results (PDF) for the year ended 31 March, the group said net debt stood at €27bn.

Under the proposals, the spun-off entity would become Europe's largest tower company, comprising of 61,700 sites, with 75 per cent located in Germany, Italy, Spain and the UK.

"We will capture industrial efficiencies through network sharing agreements signed in multiple markets, and today we are announcing the decision to create Europe's largest tower company," said Read.

Vodafone has also today launched 5G roaming in 55 towns and cities across Italy, Spain, Germany and the UK. However, coverage remains limited, as the company only switched on 5G in Britain this month.

The mobile operator is also set to close its €19bn acquisition of Liberty Global's cable networks in Germany and central Europe.

Read said: "With the completion of the Liberty Global acquisitions, Vodafone will become Europe's leading converged operator, with growing fixed and converged services contributing around half of our European service revenues."

Yesterday Vodafone and O2 revealed plans to share their 5G radio antennas and joint network sites, run by its joint venture Cornerstone. Vodafone suggested it was looking at ways to monetise the joint venture. ®