'This report is taking ages to print, let me take a closer l-argh!' 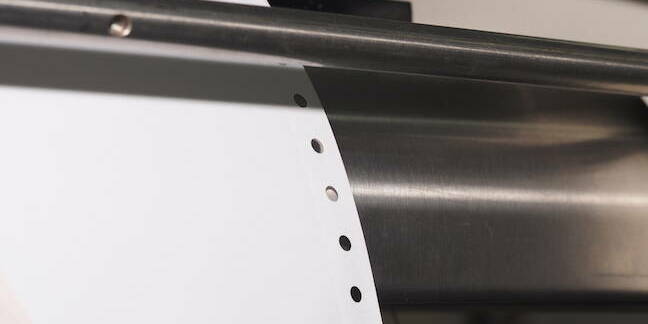 On Call Come join us in a celebration of System Administrator Appreciation Day with an On Call tale of bravery, courage and, er, hairdressing?

Today's story comes from "Andrew", a reader who spent the early part of the 1980s working for a company now better known for creating white paint with subtle hints of colour, pretentious names and eye-watering prices.

Back in those halcyon days, when paint had names like "Thatcher Blue" and "Scargill Puce", Andrew was luxuriating in his first job, taking calls and administering support. He was on his way to dispense assistance when the "incident" happened.

"I was walking past one of the departmental Dot Matrix Printers (DMP)", explained Andrew, when "I saw a lady with very long hair standing in front of said printer."

The hardware was, as was the norm for the time, an IBM ProPrinter. The 80 column dot matrix beast had been a tremendous sales success for Big Blue, with the ProPrinter line becoming a best seller. This fact would be of great comfort to its victim.

Andrew continued to his appointment when "a few seconds after I passed her, she started screaming like she was being murdered."

While IT support staff can be an alarming bunch, being assailed by shrieking users was not the norm for Andrew: "It took me between 2 and 2.5 seconds to notice what the issue was: her hair had been caught in the roll of the DMP."

Andrew dived for the plug but found some helpful person had screwed the floor socket tightly shut. After a few more precious seconds he managed to yank the power lead from the rear of the Big Blue User Eater, leaving the machine's victim, "screaming and crying uncontrollably", a mere 20 cm away from the innards of the device.

By this time, observed Andrew, "the whole commotion had attracted a bunch of people offering less-than-useable advice."

Ever helpful, Andrew told us: "I tried, but failed, to turn the print roll backwards by using the huge knob on its side to release the lady from her precarious condition."

It was time to appeal to a higher authority, and Andrew trotted off to seek out those with the skills to deal with the problem. The IT Manager proposed sending out a memo to the effect that people should not dangle hair in printers. The BOFH, naturally, had a practical solution to the immediate problem.

Since that particular model could not be rolled back and the user was too close to the machine to permit disassembly (of the printer, not the user) the only way to extricate the user was a bit of impromptu hairdressing.

"When the lady heard the solution, more wailing, crying and sobbing ensued. As I was the PFY, I got the questionable honour of cutting off her hair."

The result of the incident was a slamming of the stable door long after the bolting of the hairy horse with a memo stating "the transparent plastic lid on these printers should never be opened to be better able to see how much of your listing had been printed."

A warning label was also stuck to all the printers with a stern "Don't open this lid unless the printer is turned off and you are changing paper only!"

And as for the printer? "The department on the other side of the floor was unwilling to share their DMP" so a traipse down two floors was required to collect 80 column print-outs from the big 132 column printer.

The surprise additional exercise continued until Andrew had picked all the hair out of the workings, which took "quite a while as IBM (rightfully so) decided that 'cleaning hair from a printer' was not in their service contract."

The newly bobbed user herself, however, "never thanked me for saving her from total disaster," grumbled Andrew, "but instead gave me the evil stare any time she walked past me like it was my fault that she now looked like the main character in the 2001 film 'Amélie'."

It could have been worse.

Ever found yourself called out to extract an ungrateful user from a sticky situation of their own making? On Call needs to hear from you. ®