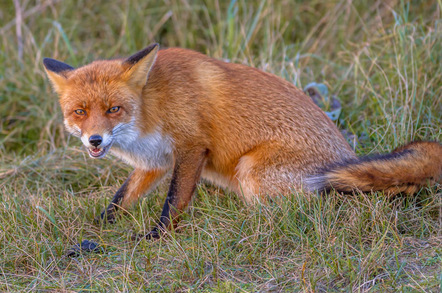 Vulture Central's scribes have known for years that our best – and most vocal – resource is you, the Reg reader. So with this in mind, this correspondent needs the 12th player on the pitch to help with a burning issue.

No, not that type of burning. The cream has helped alleviate that and the doctors say I can leave the house now. This is more related to those fluffy red bastards that have invaded urban areas with their screechy calls, tar-black shit and wanton destruction of any improvements made to, say, a garden.

Of course, the subject matter here is not Ed Sheeran but Fantastic Mr Fox. This correspondent has used myriad repellents to keep the vermin out of my carefully tended green space, ranging from liberal application of chilli powders to areas they frequent, to lion poo, ultrasonic blasters, and urinating – yes, peeing in a water can and marking my "scent" at the boundaries to deter them.

Nothing has worked. In fact, the urine seems to have drawn them ever closer, as if Vulpes vulpes were floating on a cartoon scent trail that leads them directly to the Kunert home.

Still they come, still they frolic upon and tear at my kids' trampoline, still they scare the hell out of my dog (he isn't a fighting breed), still they defecate at my backdoor, on my daughter's football, on my snooker baize-like turf: in fact, on one occasion one of the four-legged fiends dug a hole - they're just steps away from crafting stone age tools - and then "laid" an offering in it.

Did I mention they've taken to using our trampoline? This all started last summer when one of them must have caught the John Lewis Christmas ad that showed all matter of British wildlife having a great time jumping up and down on one of the bouncy things in someone's back garden. It was around Yule eve that I spied footprints and decided to zip it up - so that foxes couldn't use it. The following morning they had responded to my outrageous move by ripping off the zip and tearing the surrounding net. The bastards. And so it has continued, with a bit more torn off each week.

My garden has become an altar of fox feculence in which they leave recycled offerings to an unknown god who presumably ensures my neighbours continue to feed them with dog food. I have asked the humans living next door to stop but I suspect this is payback for loud beatbox music played each Friday evening by my two daughters.

And yet despite all of this, despite the trail of devastation, I don't want to kill the foxes. I really don't want to poison them. Shooting would be quick and relatively pain-free – but my colleague Gareth Corfield, who used to shoot rifles in the GB junior team, has so far resisted my efforts to get him to pop a few caps in their asses. I understand why. He enjoys his freedom.

So what should I do, dear readers? Tether. End. Reached. ®