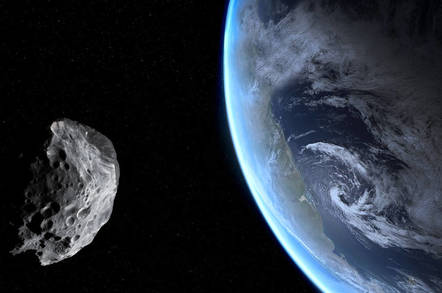 Close encounter ... What Asteroid 2019 OK may have looked like as it passed Earth

Video An asteroid zipped past Earth on Thursday, close enough to slide in between our planet and the Moon – and nobody knew the bloody thing was coming until about a day earlier, when it was within spitting distance.

If it had actually smashed into our homeworld, it could have had the same city-annihilating effect of a 5MT thermonuclear warhead going off, we're told.

The near-Earth object was finally spotted by astronomers at the SONEAR observatory in Oliveria, Brazil, at about midnight UTC on 24 July. A second crew of scientists working on the US-based ASAS-SN project, which stands for All-Sky Automated Survey for Supernovae, observed it ten hours later.

Kris Stanek, a professor of astronomy at Ohio State University and co-principal investigator of ASAS-SN, told The Register today that telescopes in Texas and Hawaii snapped several images of the cosmic boulder whizzing across the sky.

“The data showed that there was something moving - and it’s moving fast. The telescopes take 90 second exposures and the thing was moving in between all those exposures. So we needed to figure out what it was because it was moving too fast,” he said.

'That’s a little too close for comfort'

The rock, now known as Asteroid 2019 OK (no, not OK), was heading toward Earth at speeds greater than 20 kilometres per second. It continued to streak across the sky, and passed us at a distance of about 80,000 kilometres – roughly just a fifth of the distance between Earth and the Moon – in between 0100 and 0200 UTC on Thursday, July 25.

“That’s a little too close for comfort. Although nothing happened on Earth, it’s a little unsettling. We should have seen it earlier,” Stanek said.

“It originally came from the opposite direction from the Sun, so it was very much observable since it would have been dark enough to spot it. But then as it came closer, it passed in front of the Sun was lost in the Sun’s glare. In fact, telescopes in Hawaii from the ATLAS (Asteroid Terrestrial-impact Last Alert System) project did observe it earlier in July and the data was logged. It’s just nobody flagged it up.”

So, Asteroid 2019 OK inched closer and closer to Earth right under our noses, and slipped right by us with just a day’s notice. You can watch an animation that retraces the trajectory of Asteroid 2019 to get an idea of just how close it narrowly missed us below:

This is the video of the close encounter of Asteroid 2019 OK we have been Twitting all day with the Earth: https://t.co/bjT7uhQJuO pic.twitter.com/3e4UyPcdPl

Luckily, the Earth emerged unscathed. Scientists reckon the hunk of rock could be anywhere from 60 to 130 metres in diameter, which would be big enough to wipe out an entire city if it hit our homeworld.

“If it's 100 metres in diameter, it would leave a crater about 1 kilometre in diameter, and the explosion energy would be equivalent to five megatons of TNT,” Stanek told El Reg.

"If it had hit Columbus, Ohio, then there would be Columbus, Ohio, no more. But if it hits somewhere where there is nothing, then not much would happen. If it hits the ocean, it may incite a tsunami, but not one that’s life threatening."

Asteroid 2019 OK is actually pretty small in respect to other asteroids. Though, for a near-Earth object, it’s quite big. It has a strange orbit that flings it beyond Mars at its furthest distance from the Sun and brings it back in within Mercury and Venus at its closest point from the Sun. Beyond that, however, it’s pretty typical apparently.

“That rock is really not that interesting, it’s just it came so close to us,” he said. ®