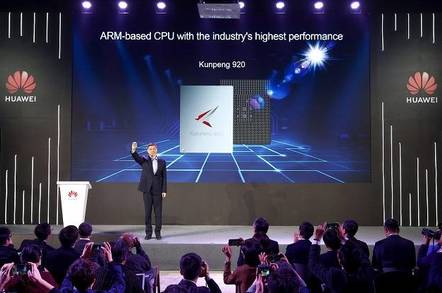 The company wants to build more products like the recently launched Arm-based Kunpeng 920 – a 64-core beast clocked at 2.6GHz, made on the 7nm process.

"In the era of diversified computing, Huawei will work with industry partners to build a computing ecosystem around Kunpeng and provide leading IT infrastructure and applications based on the Kunpeng processors for various industries," he said.

To help more customers onto a new architecture, Huawei has launched a portal with acceleration libraries, compilers, toolchains, and other things developers would need if they are to shift their traditional workloads onto Kunpeng. For the moment, at least, this is a strictly Chinese project.

The investment announcement follows the Kunpeng Computing Industry Summit in Beijing, co-hosted by the China Electronics Standardization Institute and the Green Computing Consortium, where Huawei was attempting to woo domestic customers.

Huawei is already a big player in chip design and manufacturing – its subsidiary HiSilicon is considered to be the largest domestic designer of integrated circuits in China, and is responsible for the Kirin SoC family at the core of its smartphones.

The company is familiar with Arm for smartphones and used this knowledge to create Kunpeng 920, launched in January. The chip, based on ARMv8 architecture, supports PCIe 4.0 and CCIX, alongside 100GbE; there's place for 8-channel DDR4 and it has tons of memory bandwidth.

At one point, Arm was seen as the great disruptor in the server silicon market, destined to break the monopoly of x86. Processor cores designed by the British firm are based on the reduced instruction set computing (RISC) architecture. This approach delivers less computational power per core, but can support more cores than a typical chip from Intel or AMD.

In theory, such processors are cheaper, more energy efficient and require less cooling – however, they have been struggling to find their niche in the data centre.

Arm has one important advantage in China, over chips from Intel, AMD, IBM or Oracle: the silicon can be made locally based on licensed designs which are not subject to any international trade shenanigans.

And unlike other vendors that attempt to bring Arm into the data centre, like Marvell or Ampere, Huawei doesn't need third-party server vendors to adopt its chips; its own TaiShan boxes will do the job just fine.

But this doesn't mean the company is planning to stop buying x86 any time soon, at least that is what William Xu, director of the board and chief strategy marketing officer of Huawei, said in January.

CPU manufacturing is part of a larger "Made in China 2025" project that includes the establishment of a domestic semiconductor industry that could supply at least 70 per cent of the country's needs.

Meanwhile, in the UK, the government still can't make up its mind on whether it should ban Huawei equipment from 5G networks in the UK over the claims the company presents a national security risk. ®