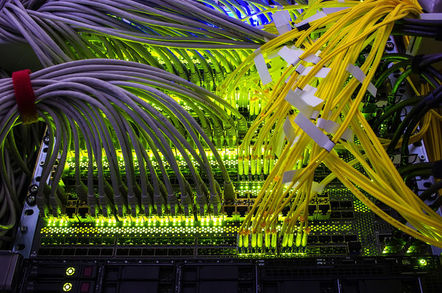 Networking software upstart Arrcus has pocketed $30m in funding to pay for a hike in R&D, double its headcount to roughly 100 staff and expand support operations.

The outfit has scored the cash pile as part of its Series B, in a round led by Lightspeed Venture Partners, bringing its total amount of funding to $49m.

The company's flagship product is ArcOS, a network operating system that runs on a wide selection of routers from "white box" vendors like Edgecore, Celestica, Delta and Quanta. Its software has been deployed by data centre operators, CDNs and service providers.

Arrcus has also claimed that ArcOS has become the first independent network OS to support the latest merchant silicon from Broadcom – the Jericho2 chip family. These chips power multiple high-density 100GbE and 400GbE routing systems already on the market, stumping up to 10Tbps of capacity and featuring high-bandwidth memory (HBM) on-board for deep buffering.

And finally, Arrcus has launched ArcIQ, described as an AI-driven analytics platform for delivering real-time insights and telemetry at scale.

With ArcOS, networking hardware and software are completely disaggregated – the approach is a hit among the hyperscalers and is becoming more popular in enterprise networking.

"We believe that the advancements that are going to be made on the networking side will be driven by merchant components and ODM hardware – but unfortunately the advancements that they have already made haven’t been fully realised in the marketplace because the missing link has been the software," Devesh Garg, founder and CEO of Arrcus, told El Reg.

"When we started the company in 2016, our focus was to provide software-centric solutions that really allow you to take advantage of all of these advancements – we wanted to provide a viable alternative to Arista and Cisco, and that's what we have done."

Arrcus is based in San Jose, California. The upstart emerged from stealth last year, with an exec team that includes Garg, who was previously president of EZchip, sold to Mellanox in 2016 for $811m; CTO Keyur Patel, who was a distinguished engineer at Cisco; Brad Batten, veep of business development, and who spent 16 years at Broadcom; and Arthi Ayyangar, veep of customer engineering, a former senior head at Arista and Juniper.

Following the latest barrage of announcements, customers can deploy ArcOS on hardware built around Jericho2 – which offers four times more ports per chip over the previous generation Jericho+, and promises "up to five times" the performance, and 70 per cent lower power per gigabit.

Meanwhile, ArcIQ is sold as a centralised analytics platform for the modern network operations centre, applying machine learning algorithms to state-based information collected from the control and data planes.

According to Arrcus, the platform can detect anomalies, provide visualisation for corrective actions and protect against DDoS, among other things. It will be available in the fourth quarter of the year. ®