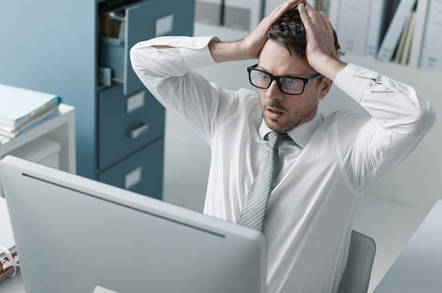 The laws of botched supply and demand forecasting are coming home to roost for the semiconductor industry in 2019 with DRAM average sales price set to fall 42.1 per cent.

The latest ladle of doom and gloom was poured onto the sector this morning by Gartner, days after IC Insights delivered its dark prognosis for chip makers.

"A weaker pricing environment for memory and some other chip types combined with the US-China trade dispute and lower growth in major applications, including smartphones, servers and PCs is driving the global semiconductor market to its lowest growth level since 2009," said Gartner analyst Ben Lee.

Smartphones sales are touted to fall 3.3 per cent to 2.2 billion units this year – the steepest recorded drop in their history. Traditional desktops and notebooks are forecast to drop to 187.2 million from 195.3 million last year. As for servers, the big cloud providers have put spending on pause.

The upshot of this is that global semiconductor revenues are expected to drop 9.6 per cent year-on-year to $475bn. This is down 3.4 per cent on Gartner's earlier forecast and likely could be revised again before the end of 2019 is upon us.

Given the volumes of DRAM swilling around the supply chain that have forced down price, oversupply is on track to spill into the first and second quarters of the next calendar year.

This is based on "slower demand recovery" for memory chips at the hyperscalers and due to DRAM makers not tuning down production quickly enough, even though Samsung, SK Hynix and Micron took corrective action in January.

The politically charged exchanges between US president Donald Trump and the Chinese government may well have longer-term implications, including speeding up the Middle Kingdom's home-grown semiconductor producers' schedules to ramp their businesses, and create local forks of tech such as Arm processors. ®