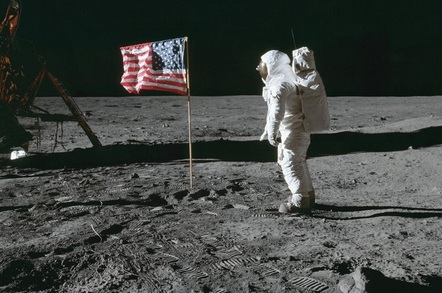 Tomorrow it will be a full 50 years since humans first set foot on the Moon, and nearly 50 years since the annual hand-wringing began over why none have gone back after Apollo 17.

For sure, Apollo 11 was a monumental achievement, as the US went from practically zero spaceflight experience to setting Neil Armstrong and Edwin "Buzz" Aldrin down on the surface within the same decade.

The Apollo program had survived multiple US administrations and policy shifts to achieve the goal set on 25 May, 1961 by a dead president. The Saturn V was, and is, a technical marvel; the Lunar Module retains the dubious accolade of being the only crewed spacecraft to land on another celestial body.

The landing of Apollo 11 has been exhaustively documented. We touched on some of the excellent books available in our previous piece (and The Register received more suggestions in the comments section. The March Hare recommended Eugene Krantz's excellent Failure Is Not an Option (it was, of course, very much an option as both crew and controllers knew all too well) and Zebo-the-Fat pointed to Kevin Fong's superb 13 Minutes to The Moon podcast, culminating in the landing itself, free of waffle.

The story of the landing has been told and retold so often that there is little left unknown. Armstrong and Aldrin, inside the fragile Lunar (Excursion) Module Eagle, left Michael Collins alone in the Command Module Columbia and headed down to the surface of the Moon.

Apollo 10 had done everything except land a few months previously, and Apollo 11 was continuing the step-wise approach by actually touching down.

50 years ago: Apollo 10 takes an unplanned spin above the lunar surface – and sh!t gets sweary

Apollo 10's radar woes had led to some sweary antics from the astronauts on board and Apollo 11 was to have its own issues, starting with near-mission-ending patchy communications with the Mission Control Center and continuing through the infamous 1202 and 1201 program alarms as the computer aboard Eagle became overwhelmed.

The computer's woes were eventually attributed to the crew having both the landing and rendezvous radars on at the same time. While keeping the rendezvous unit ready to go in the event of an abort was a sensible precaution, the computer unexpectedly ran out of cycles keeping track of things and began to bleat its distress to Armstrong and Aldrin as well as Mission Control in Houston.

A 2004 paper on the lander's guidance system presented by Apollo engineer Don Eyles laid the mystery bare. However, the alarms made for a sportier landing than the crew or controllers would have preferred.

Famously, Armstrong took manual control of the landing to dodge the boulder field to where the onboard computer appeared to be sending the lander, eventually putting Eagle down some 25 seconds before a low-fuel abort would have had to be called and the duo return to a surprised Collins.

After ascertaining it was safe to remain on the lunar surface, Armstrong and then Aldrin exited the Lunar Module. Armstrong apparently dropping the "a" in "that's one small step for a man, one giant leap for mankind."

The duo took a call from President Nixon, collected samples, set up the US flag and dropped off experiments during their limited time on the lunar surface. Armstrong and Aldrin then returned to the lunar module, repressurised the craft and settled down to get some sleep prior to a return to lunar orbit and the solitary Collins in the Columbia CSM.

The flag, planted too close to the lunar module, fell over.

The crew returned to Earth, and first Armstrong and then Collins were content to gradually disappear into obscurity. Collins, of course, went on to write an excellent retelling of his journey to the Moon and the years after in Carrying the Fire.

However, the mission has continued to cast a long shadow over NASA as the agency has striven to recapture what many see as its former glories.

Indeed, the current Artemis program, aimed at putting another boot on the lunar surface in 2024, is in danger of becoming just another Apollo as elements important for sustainability, such as the Gateway, get scaled back in the rush to the regolith.

To regard Apollo 11 as NASA's greatest achievement is to do a disservice to the crewed and uncrewed programs since. While many wring hands at a seeming lack of progress, the agency followed Apollo with Skylab and an audacious rescue mission for the stricken station. It created the Space Shuttle and used the space truck to launch and repair the likes of the Hubble Space Telescope as well as construct the International Space Station.

The agency launched multiple missions to Mars, including some highly successful rovers and some less successful landers. It sent probes to all parts of the solar system, from Mercury to Pluto, and its spacecraft are venturing into interstellar space.

Its chums, such as the European Space Agency, have also notched up successes - the Rosetta and Philae missions are examples.

However, Apollo 11 remains regarded as the yardstick by which the work of the agency and its international counterparts are measured.

That first flag does indeed cast a long shadow. If only it hadn't fallen over. ®