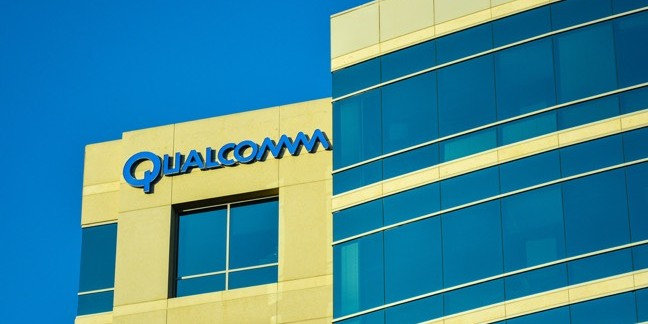 The commission claimed the company had sold 3G baseband chipsets – used for voice and data transmission – at a loss, just so it could force its British competitor, wireless modem-maker Icera, out of business.

"Qualcomm's strategic behaviour prevented competition and innovation in this market and limited the choice available to consumers in a sector with a huge demand and potential for innovative technologies," Commissioner Margrethe Vestager, in charge of competition policy, said in a statement.

The decision follows a mammoth €997m fine issued to Qualcomm last year for abusing its dominant market position – after an investigation found it paid Apple billions so the company would keep using Qualcomm networking silicon in its phones.

The more recent case focused on how Qualcomm treated Nvidia-owned Icera Inc, which was founded in Bristol in 2002 to make modem chipsets for the mobile device market by a team that included Simon Knowles and Nigel Toon – who later went on to establish the ridiculously well-funded AI chip startup Graphcore.

Icera was seen as a rising star in the baseband chip world: "It appears that Icera will quickly emerge as the third most successful supplier of LTE basebands and chipsets, well ahead of Infineon, MediaTek, Broadcom, the Japanese suppliers and a host of startups," Strategy Analytics wrote in 2010 (PDF).

The outfit was acquired by Nvidia for $367m in 2011, at a time when the GPU powerhouse was looking to boost its credentials as a mobile chip supplier.

But it was not meant to be: between 2009 and 2011, Qualcomm controlled around 60 per cent of the UMTS baseband chipset market, and it wasn't happy that some upstart was trying to get a slice of the pie.

According to the EC, Qualcomm started selling some of its UMTS chipsets below cost to Huawei and ZTE, with the intention of eliminating Icera. Market dominance is not illegal under EU antitrust rules – but attempts to restrict competition certainly are, under Article 102 of the Treaty on the Functioning of the European Union.

"The targeted nature of the price concessions made by Qualcomm allowed it to maximise the negative impact on Icera's business, while minimising the effect on Qualcomm's own overall revenues from the sale of UMTS chipsets," read a statement from the Commission.

In May 2015, Nvidia announced it was winding Icera down, expecting to pay between $100m and $125m in restructuring charges as a result. Two months later, the EC kicked off its investigation into Qualcomm's pricing strategy.

"Baseband chipsets are key components so mobile devices can connect to the Internet," Vestager said. "Qualcomm sold these products at a price below cost to key customers with the intention of eliminating a competitor.

"Since this is illegal under EU antitrust rules, we have today fined Qualcomm €242m."

Fines imposed on companies found in breach of EU antitrust rules are paid into the general EU budget. Member states' contributions to the EU budget for the following year are reduced accordingly.

We have asked Qualcomm for comment and will update when we hear back. ®