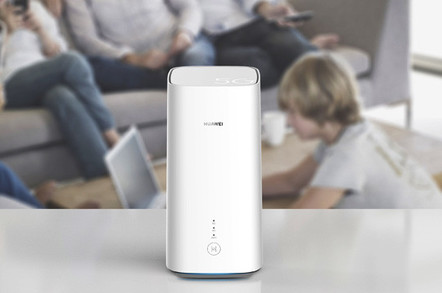 Mobile connectivity provider Vodafone has expanded its 5G network to another eight British towns and cities.

The amazing wireless tech of the far-flung future is now available in Birkenhead, Bolton, Gatwick, Lancaster, Newbury, Plymouth, Stoke-on-Trent and Wolverhampton – even though there isn't much you can do with a 5G network at the moment since only a handful of mobile devices support the new standard.

Telco standards peeps at 3GPP plan to emit Release 16 – AKA the Standalone standard – in December next year.

The recent rollouts have all been "non-standalone" 5G deployments – meaning the network is supported by existing LTE (4G) radio and core network infrastructure.

One of the few things you can do, however, is take a 5G signal and translate it into reasonably fast Wi-Fi without the need for any wires – something Vodafone previously demoed in Birmingham as it launched the UK's first railway station with 5G connectivity.

Now the same capability is available to mere mortals – the company has introduced a 5G router called GigaCube that turns its 5G network into Wi-Fi, available to both businesses and consumers.

The hardware is made by (gasp) somewhat controversial Chinese vendor Huawei – which has just been given the green light from the UK government to continue its operations unobstructed and is expected to achieve the same in the US in weeks to come.

The router (Huawei 5G CPE Pro) promises speeds of up to 1Gbps, 90m Wi-Fi range and support for up to 64 devices at the same time. It can be taken out of the home or office and used on the road. Vodafone said the GigaCube would be particularly useful for businesses "that don't have a fixed location". It also supports the upcoming Wi-Fi 6 standard.

The 5G GigaCube could bring happiness to people allergic to Ethernet who are prepared to suffer lower performance and higher cost as long as there are no wires involved.

In the future, this approach could potentially be used to improve connectivity in areas underserved by traditional wired connections, but since initial 5G rollouts focus on large population centres, this scenario does not apply for now.

Vodafone's network includes a total of 15 locations in the UK – Birmingham, Bristol, Cardiff, Glasgow, Manchester, Liverpool and London got 5G tech at the beginning of July.

The company promises to launch a European 5G roaming network Soon™ with customers able to enjoy their ultrafast wireless coverage in at least 55 locations across the UK, Germany, Italy and Spain at no additional cost.

"Vodafone's global presence means we can provide our consumer and business customers with 5G in more destinations than any other UK provider," said Vodafone UK CEO Nick Jeffery. ®