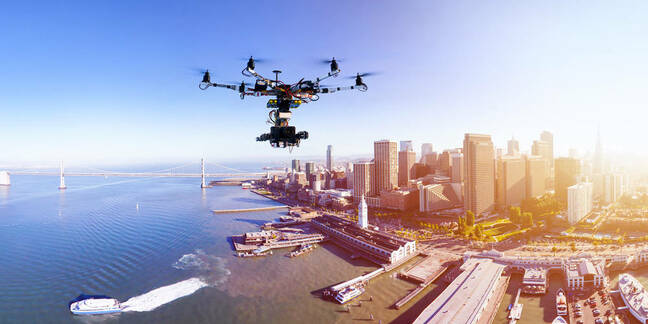 Note: This drone was not used in this research project

AI algorithms can help you automatically fly a drone of your design, according to new research that will be presented at the SIGGRAPH conference on computer graphics later this month.

A bunch of boffins at Massachusetts Institute of Technology (MIT) have devised a method that "computes a neural network controller for a hybrid UAV". Hybrid drones can fly like multi-rotor UAVs, taking off and landing vertically, and can glide horizontally like a fixed wing plane. These types of UAVs are difficult to control; engineers often have to manually design separate controllers for both flight modes and tailor the software to the drone's blueprints.

Now AI can help automate this process for hybrid drones of various designs. First, a customisable drone is designed in OnShape, commercial online CAD software that pieces together the vehicle's parts like its wings, body, tail and its rotors.

There are rules to how these components can be put together, mind you. Not every single design is sensible, and some will not be able to fly if the weight of the body and the rotors aren't balanced. After an appropriate drone is designed, it is taught how to fly in simulation. The team built a neural network controller that learns how to adjust the thrust of the rotors on the drone given an input velocity and the orientation of the device.

When the drone is finally constructed, it can automatically fly in real life the same way it was taught via simulation. "Our method allows non-experts to design a model, wait a few hours to compute its controller, and walk away with a customized, ready-to-fly drone," said Jie Xu, lead author of the project (PDF) and a graduate student from MIT's computer science and AI lab. "The hope is that a platform like this could make these more versatile 'hybrid drones' much more accessible to everyone."

Here's a video of two drone designs being brought to life using the software. The first one features a UAV made out of a flat rectangular body with four rotors, and the second one is a more traditional plane-like design.

The neural network controller is trained via reinforcement learning. The goal is to fly the drone steadily by adjusting the rotor's thrust. "The controller here is a feedback function which takes the input or target velocity from the pilot and the copter state like its orientation from a sensor," Xu told The Register. "It then outputs the desired rotor thrust for each rotor. The controller is running at each timestep during flight."

So, all the pilot controls is how fast the drone flies in each direction using an external remote controller. The AI component automatically fine-tunes the rotor's rotational speed and thrust so that it can fly more effectively in the hybrid flight modes. To transfer what the drone learns during simulation so it can fly in real life, the researchers made sure to include the effects of sensor noise, drift, and any latency delays in simulation.

At the moment these automated hybrid UAVs can only perform simple maneuvers like taking off, landing, or flying in an S-shape for tens of seconds.

"Because of the size limitation of the testing field and the limitation that our model now is only able to do mild turns, in actual flight tests we validate our controller as it does the basic operations of taking off, gliding forward and transitioning back to copter mode, all of which takes around 15 to 20 seconds," Xu said. ®

In case the headline whizzed over your head like an AI-trained hybrid drone and rock music is "just noise" to you, it's a nod to "Learn To Fly" by Dave Grohl's post-Nirvana vehicle Foo Fighters. 1999 – definitely qualifies as dad rock now.