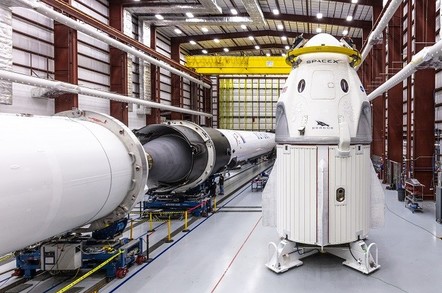 SpaceX has posted an update on the investigation into the destruction of its Crew Dragon test vehicle in April.

In short, it was a leak and a dodgy valve wot dunnit.

The incident happened at 18:13 UTC on 20 April while SpaceX was conducting static fire engine tests atop a test stand at the company's Landing Zone 1 at Cape Canaveral Air Force Station, Florida.

The infamous (and subsequently pulled) video showed the capsule exploding as the company prepared to fire the eight SuperDraco thrusters for a final time during the test. The SuperDracos are designed to push the spacecraft away from a failing Falcon 9 and are only to be used in the event of a launch escape scenario.

The 12 Draco thrusters used to manoeuvre the spacecraft, which have heritage from the Dragon cargo freighter, had already been tested.

A review of the data showed that the "anomaly" happened approximately 100 milliseconds before the SuperDracos were due to fire.

The results of the investigation demonstrate just how fortunate SpaceX has been to catch the problem before a crew was shoved into the capsule.

A leaking component allowed liquid oxidiser (nitrogen tetroxide) to find its way into high-pressure helium tubes during ground processing. A slug of that oxidiser was driven through a helium check valve during rapid pressurisation, resulting in a structural failure within the valve. The failure of the titanium component in a high-pressure nitrogen tetroxide environment was enough to cause ignition.

The SpaceX team were keen to talk up the survival of the SuperDraco thrusters – scant comfort to anyone who might have been inside the capsule.

The ultimate cause looks like a failure of imagination. The reaction between titanium and nitrogen tetroxide at high pressure was simply not expected. As SpaceX pointed out: titanium has been used safely for decades.

Lessons have been learned at a financial and schedule cost, but thankfully not in terms of human life. The flow paths that could allow liquid propellants to enter gaseous systems will be eliminated, and those check valves are to be replaced by burst disks, which seal completely until opened by high pressure.

The modifications will be made to all future capsules, including the Crew Dragon that was originally intended to carry the first crew, which will instead be used for the In-Flight Abort test.

The spacecraft originally planned to perform the first operational crew mission to the International Space Station will now be used for Demo-2, taking astronauts Bob Behnken and Doug Hurley on a first jaunt to orbit in Musk's space jalopy.

Neither NASA nor SpaceX would be drawn on when the first crewed flight might actually take place. ®