Also: Virgin Orbit demonstrates it can drop stuff off a 747 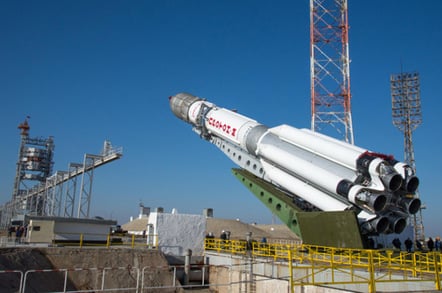 Roundup While some at NASA may still be obsessing over past glories, other eyes remained fixed on the Moon, Mars and beyond in this week's rocket-bothering roundup.

The Proton-M is derived from the original Proton, first launched back in 1965. The Proton-K variant (now retired) of the heavy lifter launched the first module of the International Space Station, Zarya, at the end of 1998, followed by Zvezda in 2000.

While the comparatively lightweight observatory, Spektr-RG, only weighed in at 2,712kg, it has quite a trek ahead of it. The X-ray facility will be stationed at the L2 Lagrangian point, approximately 1.5 million kilometres from Earth, after a three-month cruise.

The original launch in June was called off to deal with a faulty battery. A planned launch on Friday was scrapped due to more technical issues with the rocket. Saturday's attempt, however, went off without a hitch.

The #SpektrRG observatory successfully separated from the upper stage!

The mission, led by Russia, is expected to last for 6.5 years, four of which will be spent surveying the sky and the remainder observing points of interest.

The main telescope is eROSITA, developed by Germany's Max Planck Institute. With its seven gold-plated mirror modules and a camera cooled to -90˚C, boffins hope to learn more about dark energy thanks to the spectral and spatial resolution afforded by the hardware.

Things did not go quite so well for India as launch of the country's flagship and much-delayed mission to the Moon, Chandrayaan-2, was called off at the last minute due to what officials called a "technical snag" with the GSLV MkIII-M1 launcher.

A technical snag was observed in launch vehicle system at 1 hour before the launch. As a measure of abundant precaution, #Chandrayaan2 launch has been called off for today. Revised launch date will be announced later.

The scrub happened less than an hour before Chandrayaan-2 was due to leave the launchpad.

The ambitious mission, should it ever get off the ground, consists of an orbiter, lander and rover. The plan is to have the spacecraft orbit the Moon and send the lander to the Lunar surface. The rover and the lander would then last around 14 days on the regolith while the orbiter is expected to endure for one year.

The timing is unfortunate since it occurred after the fuel tanks of India's heavy launcher were filled. Those tanks required draining, and the turnaround until the next attempt could well be lengthy. The Indian Space Research Organisation (ISRO) has not given a new target date for the much-delayed mission.

Should all eventually go to plan, Chandrayaan-2 will make India the fourth nation to achieve a soft landing on the Moon, after the USA, Russia and China.

It was all change in NASA's Human Exploration and Operations office as veteran associate administrator and, we like to think, "voice of reason" William Gerstenmaier was booted into the role of "special advisor" to NASA's deputy administrator, Jim Morhard, and former Shuttle astronaut and ISS Commander Ken Bowersox dropped into the vacant seat.

The news, first reported by agency antagonists NASAWatch, comes as rumours swirl over a potential pivoting to formalising Mars as a human destination and turning NASA's dreams of a sustainable lunar presence into an Apollo-style flags-and-footprints affair in order to meet US president Donald Trump's 2024 dreams.

The move is an odd one. Gerstenmaier has been a steadying influence during the decade or more of direction changes inflicted on NASA's human spaceflight programmes by successive US administrations. With his 65th birthday approaching, he could have been forgiven for opting for retirement in light of the over-promising and under-funding of NASA's Moon plans. Instead, it seems a demotion is the order of the day.

Still, at least the SLS might launch at some point. One day.

Check out Boeing and NASA techs lifting a @NASA_SLS liquid oxygen tank into newly built stands for structural testing at @NASA_Marshall. When the rocket launches, this type of tank will hold 196,000 gallons of propellant. pic.twitter.com/BPMFYCQJAF

In the meantime, NASA pressed ahead with plans to outfit the ISS with another International Docking Adapter (IDA) to handle the demands of the forever-almost-here commercial crew vehicles due to visit the outpost.

IDA-2 was installed back in 2016 and was used by SpaceX's ill-fated Demo-1 Crew Dragon earlier this year. That capsule infamously blew itself to pieces during ground testing.

IDA-3, which is one of the primary payloads on the SpaceX CRS-18 resupply mission, due for launch on 21 July, will be fitted to a Pressurized Mating Adapter (PMA) on Node 2 of the ISS. A spacewalk will be needed to permanently install the thing.

IDA-1 never made it to the ISS, having been destroyed with the rest of CRS-7 when one of Elon Musk's Falcon 9s failed.

Richard Branson had two more reasons to celebrate last week as small satellite launcher Virgin Orbit inched closer to being operational while tourist flinger Virgin Galactic raised some more capital as it sought to finally send paying passengers on a brief trip to space and back.

A beautiful separation. We could watch this all day. ✈️🚀 pic.twitter.com/w1kekz3uXB

On 10 July, Virgin Orbit completed a drop test of the LauncherOne rocket from its Cosmic Girl Boeing 747 carrier aircraft.

The flight, which took off from the Mojave Air and Space Port at 08:43 Pacific time, dropped the inert vehicle from a height of 35,000 feet at 09:13 over an Edwards Air Force Base testing range.

The purpose of the test was to ensure the separation of rocket from aircraft was as clean as possible and observe how the inert rocket fell. From that perspective, all went well. The mission, according to the company, brings the flight test programme to a close.

Next up, hopefully this year, will be an actual launch to space.

The gang plans to build 24 LaunchOne rockets at its facility in Long Beach, California, with each rocket capable of flinging payloads from 350-500kg into orbit.

In other news, Virgin Galactic, which is tantalisingly close to launching the first of the 600 paying customers the company claims to have on its books, announced a merger with Social Capital Hedosophia (SCH) last week.

The value of the merger is put at $1.5bn, and SCH Founder and CEO Chamath Palihapitiya will invest an additional $100m (at $10 per share) and become chairman of the new entity.

George Whitesides, CEO of Virgin Galactic, reckoned the transaction "will offer us the financial flexibility to build a thriving commercial service".

Certainly, the company could use the cash in getting its SpaceShipTwo vehicle ready for commercial sub-orbital lobs, particularly with Jeff Bezos' Blue Origin also due to start carrying wannabe astronauts aboard the New Shepard launcher later this year.