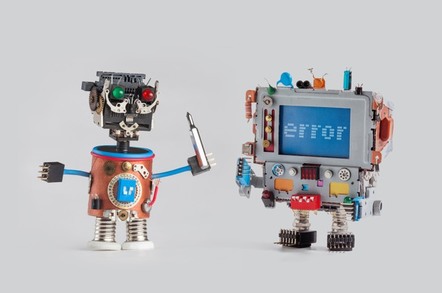 With America's trade watchdog on Tuesday hosting a workshop in Washington DC on restrictions that limit the feasibility of repair devices, hardware rehab forum iFixit has penned an open letter to the FTC to complain about Google's ad policies that hinder the mending of machines.

Last August, the Chocolate Factory announced that because its ad system lacks an easy way to distinguish between legitimate businesses and scammers, it was planning to institute a verification program limiting ads for third-party tech support and repair services to legitimate providers.

In theory, Google's program should cut down on scammers who pay for online ads that promote computer troubleshooting, virus remediation, or other security-related assistance, only to rip off victims or hijack their machines.

And Google's program may well be thwarting these crooks, though at the cost of denying legitimate repair businesses the ability to market themselves to customers.

"By treating all third-party repair as a fraud-prone liability, and directing all interest in device repair to their own Maps and search results, Google is severely handicapping repair businesses, prioritizing purchases over repair and reuse, and deciding which companies customers can turn to when they need to fix electronics," explained Kevin Purdy, a writer for iFixit.

"Hey @GoogleAds, your tech support ad policy is resulting in collateral damage," he wrote. "U need to get some verification process going asap. I run a legitimate, fully registered, and insured local computer repair company. Not being able to advertise my services is a huge blow to my biz."

Earley accused Google of implementing an unfair policy because the web giant allows ads from Geek Squad, a third-party repair service, while denying ads to a small business that actually builds and sells its own line of custom computers for its local market.

In a phone interview with The Register, Earley said he wasn't sure when the policy when into effect but confirmed that it had hurt his revenue. He said he submitted a form to get verified and then got a call a few days later from the Google Ads team telling him to change some things on his website. He was told he couldn't link to a free software tool he used for support. So he made the required modifications to the CompuNinja's website and was told he should hear in a week about his verification request.

Despite having done so, Earley said he received a notice that his application had been denied. "They said they were blocking everyone due to the tech support scams," he said.

Google did not immediately respond to a request for comment.

"Google's sweeping ban hampers the right to repair," said iFixit editor Whitson Gordon in an email to The Register.

"The less exposure independent repair shops get, the more people are pushed to see the manufacturer as the only point of service, even though many manufacturers flat-out refuse certain repairs. It also pushes people to buy new devices instead of repairing the one they have, which is costly and harmful to the environment.

"Last year, Google said it would roll out out a verification program for third-party support providers but that hasn't happened yet. I would hope they’re still working on putting it together, and I think that’s a decent way to go about fighting repair scams.

"There's some legwork involved, but considering manufacturers like Apple, Samsung, and Google themselves already authorize and recommend certain repair providers for their devices, one wouldn't think this process impossible. Legitimate businesses (and customers looking for help) shouldn't be punished across the board because scammers abuse the system."

The complaint from iFixit touches on one aspect of the broader concerns about the expansive legal, technical and practical hindrances that have been making it more difficult for folks to repair products over the past few decades.

The growing presence of DRM – digital-rights management, or anti-piracy tech – in products has given manufacturers legal support to prevent consumers and third-parties from modifying and repairing purchases through digital restrictions. The absence of interoperability requirements has given product makers even more control. And miniaturization has allowed product designs that can be physically challenging to alter.

Manufacturers such as Apple and Microsoft, to name a few, have benefited from being able to capture repair revenue by limiting competition. In comments submitted to the FTC in May, Microsoft urged the trade agency to balance the right to repair with conflicting concerns.

"Designs or policies that may appear to limit self-repair or repair by an unauthorized agent should not be assumed to be harmful to consumers," the Windows maker said. "Many design features sought by consumers, including for aesthetic, safety, security, or operability reasons, may have the secondary effect of making repairs more complex or challenging."

Microsoft has been criticized by iFixit for using glue rather than screws to hold devices like its Surface Pro 3 together, thereby making its hardware more difficult to repair.

Beyond the FTC's interest in the right to repair and support from US presidential hopefuls like US Senator Elizabeth Warren (D-MA), least 20 states are presently considering right to repair legislation. The UK government meanwhile is looking into the power that Google and Facebook have over the digital ad market. ®