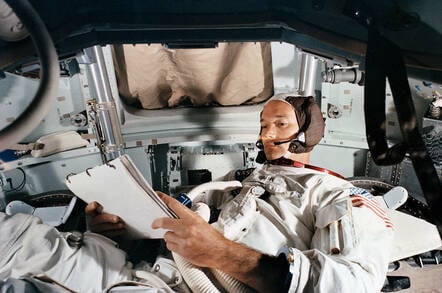 On 16 July 1969, Apollo 11 launched from Kennedy Space Center's Launch Complex 39A in Florida on an eight-day mission to the Moon and back.

The launch, the sixth of a Saturn V, came less than two weeks after the second attempt by Russia to send its own monster rocket, the N-1, on a jaunt to the Moon.

The second N-1 and the sixth Saturn V

Carrying an uncrewed Zond spacecraft and a live escape tower, the N-1 suffered a first-stage engine shutdown just after clearing the launch tower. One engine continued to fire, causing the stack to topple over and fall back onto the launch pad. The subsequent blast sent debris flying miles from the site and effectively ended what little hope remained of the Soviets reaching the Moon before the Americans.

At the time of its launch, NASA's Saturn V, on the other hand, had five successful excursions under its belt in the form of the test Apollo 4 and 6 flights, followed by the crewed Apollo 8, 9 and 10. NASA had sent humans to the Moon on Apollo 8 and ventured toward the lunar surface on Apollo 10. The idea was that Apollo 11 would continue the step-by-step pushing of the envelope and attempt the landing.

Should the landing have to be aborted, Apollo 12 would be waiting in the wings to have another crack. We can only imagine what awaiting 'naut Pete Conrad's first words would have been.

Though the second N-1 launch had gone badly, the Space Race was very much alive in the minds of officials, who tinkered with the wording on the plaque to be attached to the Lunar Module. The words "first landed" were switched for "set foot" to emphasise it was all about the humans, and "July 1969 A.D." snuck the whole God thing into it, according to John Lodgson's book After Apollo.

The addition of then US president Richard Nixon's signature was also a late decision on NASA's part, "reflecting the space agency's interest in making the President positively disposed toward NASA's post-Apollo plans."

As history was to show, the plan failed.

There were also mutterings that the Apollo 11 Command and Service Module (CSM) could be commissioned "The John F Kennedy" in honour of the late president. The idea was, unsurprisingly, rejected by the US administration and the names Columbia and Eagle announced by the crew on 5 July. Nixon himself never uttered Kennedy's name during the celebrations around Apollo 11's achievement.

Nixon had also intended to have dinner with the crew prior to launch. The meeting was called off due to concerns that the president might infect the crew – Neil Armstrong, Buzz Aldrin and Michael Collins – with germs during their quarantine. Command Module Pilot Collins noted in his book Carrying the Fire that NASA Administrator Tom Paine "was apparently germ free" and enjoyed a quiet dinner with the trio.

Collins reported that the pressure weighed heavy on him as the launch approached, as if a fresh commandment had been added – "thou shalt not screw up" – even though the crew were all experienced astronauts from the Gemini era.

To bring a little levity to proceedings, Collins was accompanied by the smallest trout he could find, nailed to plaque and inscribed "Guenter's Trophy Trout" in reference to the boasting of mechanical engineer Guenter Wendt , the launchpad "Czar", about his fishing prowess.

The launch, on 16 July at 13:32 UTC, went off without any major problems, although Collins recalls a few hairy moments, notably a bulky pocket added to the left leg of Armstrong's suit that threatened to snag on the abort handle, despite the best efforts of the commander. Collins wrote: "Jesus, I can see the headlines now: 'Moonshot falls into ocean. Mistake by crew, program officials intimate. Last transmission from Armstrong prior to leaving launchpad reportedly was 'Oops'."

Collins gave an astronaut's perspective of the launch, trotting out the hard-to-visualise figures of four and half million pounds of propellant consumed in the first two-and-a-half minutes of flight, before comparing the slow build to 4G favourably to his Titan experience. "The Saturn is a gentleman and will not plaster us into our couches" before separation, he quipped. As for the start of the second stage, Collins described it as "smooth as glass, as quiet and serene as any rocket ride can be."

When the third stage was finally shut down, at 11 minutes and 42 seconds, the astronauts were left in orbit, with their heads pointing towards the direction of the Earth. The attitude was to allow the sextant in the belly of the Command Module to point at the stars so Collins could take star sightings and check the guidance systems were behaving.

After an orbit and a half, the engine of the S-IVB fired up once again to send the remains of the Apollo 11 stack toward the Moon. Half an hour after that, with Collins at the controls, the CSM separated from the S-IVB, retrieved the Eagle lunar module and continued its journey to lunar orbit.

Collins admitted that he used a little more fuel than planned in the docking of the spacecraft, fretting: "I want to save every drop in case of a freakish rendezvous situation around the Moon."

Michael Collins' book, Carrying the Fire, is one of the best astro-memoirs out there and highly recommended. John M Lodgson's After Apollo on Richard Nixon and the American space programme is also one to have in the library, if ultimately a little depressing.

Alan Lawrie and Robert Godwin's Saturn is an excellent resource for facts and figures, while Apogee's Rocket and Space Corporation Energia proved useful in researching the N-1. ®