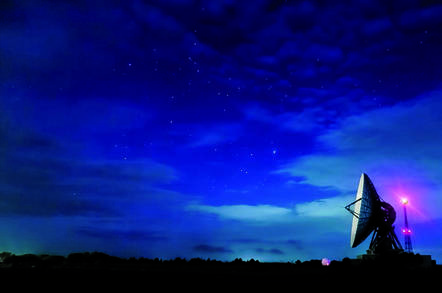 Goonhilly Earth Station, the Cornish-based satellite comms and space tech hub, has cut the ribbon on a data centre to sell colocation and managed services.

The facility can support around 500kW of IT but could be expanded in the future, with up to 5MW of power up for grabs.

A part of the bit barn was designed for HPC workloads and houses a machine learning cluster, cooled in a specialist enclosure filled with mineral oil, designed by Spanish startup Submer.

The facility benefits from a reliable, fully backed-up power supply – the same that feeds its satellite antenna arrays – and advanced connectivity: the site was owned by BT until 2014, and serves as a landing point for several transatlantic submarine fibre cables, including SEA-ME-WE-3, the longest cable system in the world.

"What do you need for a data centre? You need power, you need connectivity, and ultimately you need clients who will buy your service – we've got all of those," Chris Roberts, the recently appointed head of data centres and cloud at Goonhilly, told El Reg.

Goonhilly has been receiving satellite signals since 1962. At one point, it was the largest satellite Earth station in the world, with more than 25 communications dishes in use and over 60 in total. Customers on the site include SES, Intelsat, Eutelsat and Inmarsat, as well as space agencies and governments.

In 2006, BT announced it would leave Cornwall and move satellite operations to Madley Communications Centre in Herefordshire. A new company, Goonhilly Earth Station Ltd, was established in 2014 to repurpose the historic location – and a new data centre is an essential part of these plans.

Goonhilly management hopes to create a UK hub for AI and ML services that would use satellite and telescope data and allow academia and enterprise to share ideas.

For a while, it was thought Goonhilly could become an actual spaceport – alas, the government has opted for a horizontal-launch spaceport at Prestwick, south of Glasgow.

Right now, the Goonhilly data centre can host 90 racks in a single data hall, with power densities of around 5kW per rack, and there's a single Submer enclosure for high-density servers, able to cool up to 50kW. Submer designs and manufactures horizontal server racks filled with dielectric coolant, which is more effective than air at removing heat. The coolant circulates thanks to natural convection and a secondary warm water circuit ejects the heat from the system.

Right now, the unit is still being tested, housing 10 machines equipped with Nvidia's civilian 1080 and 2080 GPUs, but the Goonhilly team are very happy with the results: "We've already got three 'proof of concept' clients ready to launch," Roberts said. "And the great thing about the unit is because it is so modular, we can very quickly deliver two or three more, or even five or ten more, in a very short order."

The data centre is powered by electricity from renewable sources – there's a solar array on the grounds producing around 350kW, and whatever is not covered by the Sun is offset by wind power widely available in Cornwall. Roberts believes the Earth station has an important part to play in the democratisation of space – with microsats and cubesats becoming an increasingly important part of the planet's orbital network.

"We host the Satellite Applications Catapult, they are headquartered here. Our day job is working not just for global giants – probably 40 per cent of our time is spent working with SMBs who are looking to turn great ideas into commercial operating entities that drive revenue. The cost of entry into space has reduced dramatically now." ®