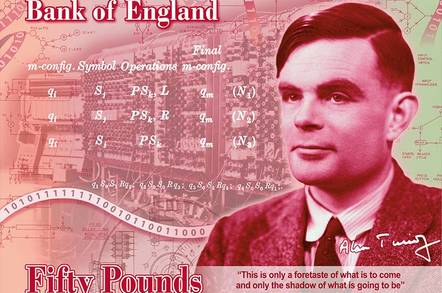 Legendary codebreaker and father of theoretical computer science Alan Turing will soon be gracing your pocket on the side of a shiny new £50 note.

The cash will feature a portrait of Turing, the Automatic Computing Engine (ACE) developed by the man, a mathematical table from a seminal paper on computable numbers, the blueprints of the British version of Bombe – one of the primary tools used to break Enigma-enciphered messages during WWII – and a string of binary code denoting Turing's birthday.

It will also include Turing's prescient quote on computing, given in 1949: "This is only a foretaste of what is to come, and only the shadow of what is going to be."

Turing was chosen out of a list of 989 British science luminaries suggested by the public, beating such contenders as Charles Babbage, Dorothy Hodgkin and Stephen Hawking.

At the end of last year, The Register presented our own list of boffins we deemed worthy of the honour – and readers voted overwhelmingly for Turing too, followed closely by Rosalind Franklin.

The new polymer note is scheduled to enter circulation by the end of 2021.

Turing developed the theory that underpins all modern computers while working at the National Physical Laboratory and later at the University of Manchester. He also devised the Turing test – a thought experiment that attempts to define a standard for a machine to be called "intelligent".

During the war, Turing was working for the Government Code and Cypher School at Bletchley Park, where he played a pivotal role in cracking intercepted messages encoded with the Enigma machine, helping the Allies defeat the Nazis.

Despite his many achievements, Turing was persecuted by the state for his homosexuality – which was a crime in the UK at the time. Instead of being rewarded for his wartime heroics, he was convicted of gross indecency in 1952 and sentenced to chemical castration using Diethylstilbestrol (DES), in a horrible process with a variety of side-effects. The alternative was prison.

Which scientist should be on the new £50 note? El Reg weighs in – and you should vote, too

After suffering from side-effects, Turing killed himself in 1954 by ingesting cyanide by the way of a poisoned apple – although rumours that he was poisoned by government spooks have endured to this day.

The UK government publicly apologised for the treatment of Turing in 2009, and he and another 59,000 men were officially pardoned by the Queen in 2013.

"As the father of computer science and artificial intelligence, as well as war hero, Alan Turing's contributions were far ranging and path breaking. Turing is a giant on whose shoulders so many now stand," said Mark Carney, governor of the Bank of England. ®