PC shipments back in black: Desktops to the rescue, aided by Win10

Big three only got bigger after snaffling remaining Intel CPUs 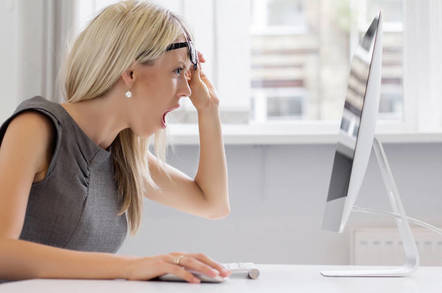 Global PC sales are back in the black with almost 63 million computers finding a temporary home in warehouses owned by distributors or retailers, preliminary figures reported by Gartner claim.

Following two straight quarters of shrinkage, the market returned to growth in calendar Q2, albeit up by just 1.5 per cent year-on-year. Unsurprisingly, the big three vendors – Lenovo, HP and Dell – made hay while Intel CPU shortages lingered.

Don't forget, readers, these are shipments into the channel, not into customers' business premises or consumers' homes.

Intel's near year-long battle to match processor supply with demand was still a factor, she said, though the buying power from the PC top three meant they hoovered up even more market share, up to 64.1 per cent of all PCs sold versus 60.7 per cent a year earlier.

Kitagawa claimed "there are signs that the intel CPU shortage is easing", though HP previously estimated that constraint will run through Q3.

The analyst added: "The shortage mainly impacted small and midsize vendors as large vendors took advantage and continued to grow, raking market share away from the smaller vendors that struggled to secure CPUs."

Lenovo returned to the PC summit, accounting for one in four global sales-in - shipments jumped almost 16 per cent to 15.774 million. The units "reflected some anticipation of the potential tariffs", Gartner ventured.

US president Donald Trump is playing tariff tag with China and imposing levies on hundreds of billions of dollars' worth of goods imported from the Middle Kingdom. PC makers are worried about being stuck in the middle.

Tech jocks tell Trump: Tariff tiff with China will not achieve what you think it will achieve

"While the US-China trade war did not impact the PC market in the second quarter of 2019, the next phase of tariffs could have significant impact," said Kitagawa. "Most laptops and tablets are currently manufactured in China and sales of these devices in the US could face significant price increases if the punitive tariffs are imposed and vendors do not take quick action to respond."

This all makes for a less-than-certain short-term outlook, she added. The US and Chinese governments are in the midst of negotiations over the import duty.

HP was relegated to second spot on shipments of 13.992 million, up just 2.6 per cent. HP has previously claimed that it doesn't want market share for market share's sake.

CEO Dion Weisler said in May that it is "aggressively pursuing the heat in the market" as well as "profitable market share from rivals". Clearly he wasn't referring to Lenovo.

Dell took third place based on shipments of 10.654 million, up 2.1 per cent, handing it a market share of 16.9 per cent – this was its sixth consecutive quarter of growth.

As for the also-rans, Apple clung to the fourth spot as its shipments shrank less than those below it in the rankings, falling 0.2 per cent to 3.711 million units. Acer was down 14.4 per cent to 3.395 million and ASUS fell 9.9 per cent to 3.1 million.

In the US 14.506 million PCs were shipped, down 0.4 per cent. In Europe, Middle East and Africa they were up 1.7 per cent but no unit figure was given. In Asia Pacific sales were down 1 per cent and in Latin America shipments declined 3.9 per cent. ®