I don't have to save my work, it's in The Cloud. But Microsoft really must fix this files issue 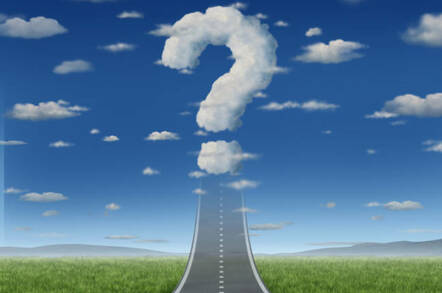 On Call Join us in closing out the week with another tale from those brave souls charged with taking that call in our weekly feature, On Call.

Today's storyteller we will call "Jason" in order to protect the less-than-innocent. Jason worked as support for an organisation in the process of migrating users to the excitingly cloudy world of Office 365. The familiar desktop applications remained but, as is the way with Microsoft these days, it was all about The Cloud.

We can just imagine the onboarding and training sessions where dubious users were introduced to this "new" way of working.

One, it seems, had paid attention to all bar a critical 1 per cent of training and was struggling to get to grips with their new software. Jason explained that the user called the helpdesk "complaining that everyone's favourite word processor, Word, wasn't saving files".

It was a strange one. "Files weren't appearing on the server, her local machine, in OneDrive, or anywhere. No temp files, no... nothing."

Ever the professional, Jason decided that paying a visit to the user would be the only way to solve this particular mystery. "Phone calls were going nowhere beyond 'It's not working'."

Let's talk about April Fools' Day jokes. Are they ever really harmless?

The user began the demonstration, fired up Word, and "started typing... and then promptly closed Word (ignoring the 'Are you sure?' prompt)."

Jason queried the user: "Why didn't you save the file?"

"Because you have to – if you don't save the file then... you haven't saved the file."

"How should I know? We were told that everything would get saved in The Cloud."

To be fair to the user, once a file has been saved once, autosave can handle the rest if configured correctly.

Jason patiently explained that the user had to actually save the file, "even to the wonderfulness that is The Cloud."

"She pondered for a moment, briefly looked as though the penny had finally dropped... and then came out with:

"I don't think this is right. You're going to have to go away and fix it."

While there are many that reckon Microsoft's cloud could use a good "fixing" with a short, sharp stick, Jason had ran out of ideas and fell back on the old "we'd have to investigate and probably end up having to raise it with Microsoft" line so beloved of support staff seeking a swift exit.

The user "then questioned how Microsoft could release something that 'blatantly doesn't work'."

As for Jason: "I mentally questioned if the user should be allowed out on her own."

Jason's team were still "investigating" when the user finally left.

Ever had to deal with a user who has absorbed everything bar one critical fact in their training? Of course you have. Tell On Call how you managed to fill in the missing piece. ®